National’s comments on the minimum wage show a party that has no answers on how to close the wage gap with Australia.

Just a day after the Government announced plans to increase the minimum wage to $12 next year – an increase of more than 70% since 1999 – John Key’s industrial relations spokesperson Kate Wilkinson has made it clear increases to the minimum wage will not be a priority under National:

So there you have it: National sees a fair wage not as a right but as an “artificial” restraint on the free market of labour. Their plan is to remove instruments the Government can use to lift pay and instead use the tax system to subsidise employers who pay low wages.

This is the same old line we heard in the 90s, and it led to a real decrease in wages for the New Zealanders who could least afford it: 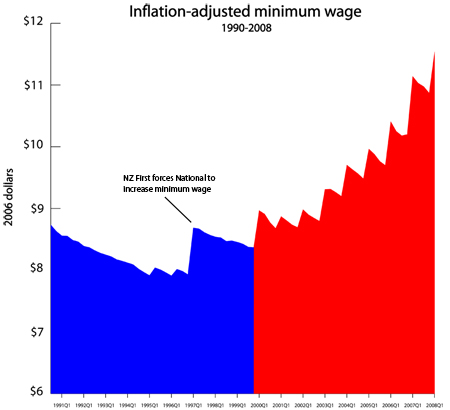 National are right when they say wages are far too low in New Zealand, but they don’t have any answers on how to fix it – just the same market-driven ideology that put us here in the first place.

[Hat tip to Kiwiblogblog for the graph data]