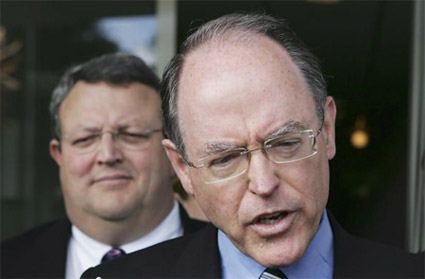 Gerry Brownlee dropped a clanger in Parliament today when he admitted that National’s opposition to electoral finance reform isn’t to do with the drafting problems, nor is it to do with anonymous donations. It’s about being able to buy their way onto the Treasury benches in election year by making sure their spending is only counted in the three months leading up to the election.

Currently campaign spending is capped for the three months before polling day. National took advantage of this in the 2005 election with a pre-campaign campaign (known as a warm-up) of at least two months of unaccountable advertising, including the infamous ‘iwi/kiwi’ national billboard campaign. Just to give you an idea of the amount of money involved, a single billboard costs between $4,000-12,000 per placement per month – and that’s not including artwork.

It’s now widely accepted by journalists and academics that the election campaign now lasts for at least a full year. Journalists I’ve spoken to have told me they believe the 2008 election campaign has already begun. Because of this the campaign period is the most relevant part of the EFB since it counts election spending from January 1.

Have a read of what Gerry had to say in the house today. It really is quite revealing. For all their talk of principles and freedom, National really are that hollow.

Gerry Brownlee: “I have in my possession a document that sets out the fact that National was happy for a rollover, provided it would lead to a much shorter election period. I seek leave to table that document, along with the document of Mr Eagleson.”

Hon Bill English: Can the Minister confirm that the effect of the Labour Party’s policy now on electoral reform, for the first time ever done on a purely partisan basis, is this: private citizens and organisations will be heavily restricted and tightly restricted on what they can spend rebutting Labour’s propaganda, but the Labour Government will have at its disposal millions for Government advertising, and all MPs’ expenditure has been exempted from tight electoral spending rules, meaning that taxpayers’ dollars will be sprayed around everywhere in Labour’s cause, and privately raised money will have to be very carefully restricted?

Hon Dr Michael Cullen: What I can confirm, thanks to the very helpful intervention by Mr Gerry Brownlee, is that Labour’s position is exactly the same as National’s on the parliamentary spending bill, except that National members want a shorter period of time for electoral spending because they have so much money in their pockets they cannot spend it if the limitations in that regard start on 1 January. They have been caught out by their own front bench on this question.

The next question is, is Gerry sabotaging the party or is he just that incompetent?