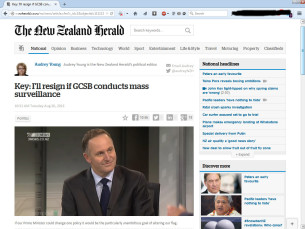 Currently, the MSM is dripping with soft-sell encouragement for New Zealanders to find something, nay, anything to agree with about sending our troops to assist in the slaughter of innocents on behalf of US corporate imperial interests. All the usual media plants, plus a few surprise cameos, have been busily pumping out all the usual focus-group approved appeals to emotion. Its the classic distraction technique; if we’ve got no choice about this, we might as well try and generate some warm fuzzies rather than writhe in the cognitive discomfort an evidence-based discussion would produce.

its just like John Key’s point blank refusal to properly address what appears to be yet more rogue actions by the GCSB is treating New Zealand with contempt. Rather than speak truth or, God forbid, do some explaining, John Key sulkily retreats into his bad habit of chanting insults hoping that attacking the messenger will kill the message. Not very grown up, although, it sort of worked last time when endless insults like “henchman” obscured the fact that the GCSB (probably) does not wholesale spy in New Zealanders. It just leaves the pipes open and looks the other way while the United States does it.

Dunno if John Key is going to escape quite so unscathed this time. No doubt his Dirty Politics Machine will fire up again now there’s some his preferred character assassination work to be done. No doubt the media plants will be running the old fashioned “nothing to hide nothing to fear” and “who really cares” lullabies on repeat. We’ve seen the roll out of what appears to be the new explanation of why this latest GCSB spying on New Zealander citizens is not unlawful. John Key would like us to believe its because those Kiwis who’s human rights are being suspended for as long the GCSB chooses are not being specifically targeted. It makes perfect sense to John Key: yes, it is illegal for the GCSB to spy on New Zealand citizens when it wants to but its not illegal to spy on New Zealand citizens when it doesn’t want to, but does anyway.

I’m not sure if that’s Orwellian or Kafkaesque but it is certainly typical of the results achieved when ever Team Key has been Working For New Zealand.