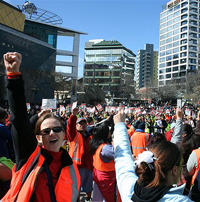 National’s strategy, the strategy of a weak party, is to present a â€˜small target’ by promising to change virtually nothing if they were in government. Problem is, their small target has a great big bull’s-eye on it called work rights.

With flip-flops on health, education, welfare, annual leave, parental leave, assets, Working for Families, Kiwisaver, nuclear ships, student loans, climate change, civil unions, etc, etc already undertaken or to be undertaken before the election, not much remains for National to campaign on as a point of difference with Labour. Tax will be defused as an issue by the cuts in the May Budget coming into effect from October, National will have to accept them and add a pretty meager sweetener of its own.

The one policy area where National has not (and ultimately cannot) follow Labour is work rights and wages. National is the party of employers; lower wages and weaker employment protections are the party’s core reason for existing. Key has already said he ‘would love to see wages drop‘. The only Bill National has ready to pass if it gets into Government is the 90-day no-rights Bill. National has said it would weaken unions and equivocated over whether it would lift the minimum wage if it were government. That’s a stark contrast to Labour, which has brought New Zealanders more annual leave, higher pay, increased minimum wage, better working conditions, more power in the workplace, and record low unemployment. So, in the one area in which National remains strongly differentiated from Labour, its policy is deeply unpopular and Labour has a very strong record.

Work rights is the one issue National absolutely cannot afford to have this election campaign decided on; and it’s the one issue they’ve left open for the campaign to be all about. All that’s needed is for Labour to take the initiative with a visionary work rights policy.