National prepares to die in a ditch over racist American flag 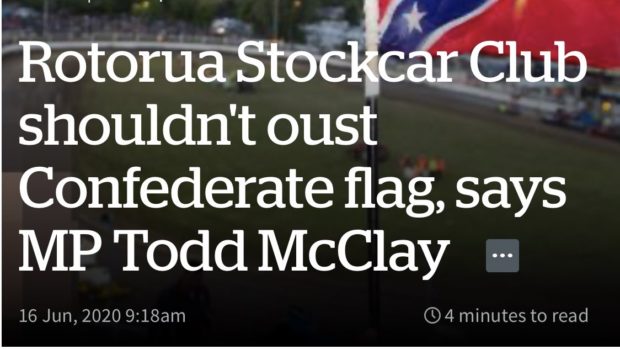 In politics there are two general theories, the conspiracy theory where events are the result of deep Machiavellian planning, and the f*ck up theory where things just happen because of human stuff ups.

Often the f*ck up theory is the real reason behind random events but sometimes Machiavellian planning is why things happen.

Todd McClay’s extreme tone deafness defence of the use of the American Confederate Flag on Aotearoa soil must be in the latter case as it is such a f*ck up that the level of ineptitude displayed is so strong.

I mean after the all white front bench, the MAGA hat, Paora Goldsmith, and the upside down Tino Rangatiratanga Flag you would think that National would violently veer away from anything slightly racist, especially as the Black Lives Matter movement reaches a new peak.

Maybe he has not recovered from his mate Simon Bridges being deposed as leader.