National, time to put your dog on a leash

As surely an endorphin high fades, Cameron Slater was going to do something to get his name back in the media.

He’s been trying to test the boundaries for a few weeks. He’s been ignored. So, stepped it up a few gears.

He’s named another person on name suppression. He doesn’t care that the name suppression is there to protect the victims. He just wants the attention. Wants to see his name in print. It fills the hole inside for a while. But the thing is, every high leaves a bigger hole. The next rush has to be bigger than the last. Got to do something bigger.

Slater is threatening to post the names, phone numbers, and addresses of judges who issue suppression orders. It’s sick stuff. It’s an attempt to bully the judiciary. It’s facilitating people who want to harm judges. It says ‘you do what I want or I put you in danger’. That’s blackmail. That’s an imprisonable offence.

National’s Simon Power could only say it’s “probably not helpful”. Not good enough. Slater is National’s rabid dog. He is their responsibility.

Slater’s dad is John Slater head of Citizens and Ratepayers – the Nats’ local body arm – in Auckland. Slater boasted of working with the Nat research unit on smear campaigns before the election. The Nats still feed him stuff they can’t have the MPs or even Farrar use. 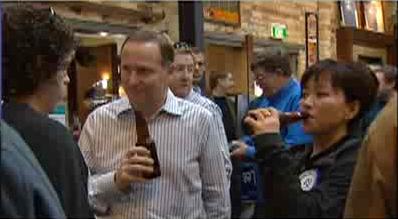 This guy is not some lone freak. He is Nat through and through. They created him. They’ve got to get him under control before he does more damage.

If anything happens to a judge because of Slater releasing the details, it will be on National’s head.

49 comments on “National, time to put your dog on a leash ”