National: we’ll borrow for tax cuts for the rich

Discovering National’s policy is a bit like the old art of Kremlinology, when Western intelligence agencies would attempt to discover the inner workings of Soviet politics by looking at who stood next to whom in pictures, and what hand politburo members carried their briefcases in. The latest subtle signs from National regarding its tax policy are: they will average ‘north of $50‘ a week and will focus on the 14% of people with incomes over $60,000 a year. The only way to achieve those parameters (without a tax-free bracket or cut to GST both of which National oppose) is to create a flat tax of 16%. The average cut would be $50 a week, but it would be spread very unevenly: on $250,000 a year you would get $920 a week; on the median income of $27,000 you would get $12.50, half of New Zealand taxpayers, 1.6 million people, would get less than that. 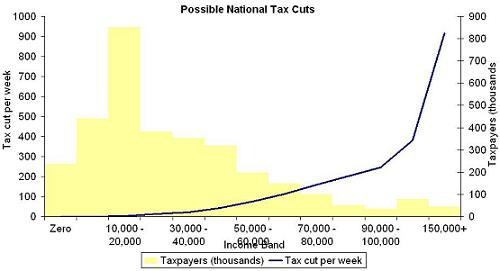 $50 a week x 52 weeks x 3.2 million taxpayers means National’s tax cuts would cost over $8.6 billion a year, that would create a huge cash deficit of around $5 billion a year. The money can’t be found by silly little measures like capping the core public service that will deliver only $166 million a year by National’s own estimate. In fact, the only part of government spending to which National has not ruled out major cuts and is sufficiently large for cuts to fund such enormous tax cuts is superannuation. And even if it slashed superannuation, National would still need to borrow to fund the tax cuts. National has previously said it is prepared to increase gross government debt 50% (from 17% of GDP to 25%); it is now clear it would use that debt to fund tax cuts for the wealthy few.

A realistic projection of National’s tax cut plan sees most people worse off: they would get little or nothing from tax cuts, with most of the money going to the wealthy few. They would face a diminished social wage from less Government spending, and have to spend more of their income buying things that are now provided by the Government. And they would face skyrocketing inflation and interest rates resulting from National borrowing billions of dollars to fund irresponsible cuts. But, as we already know, Key and National will promise anything, anything, to win.

77 comments on “National: we’ll borrow for tax cuts for the rich ”