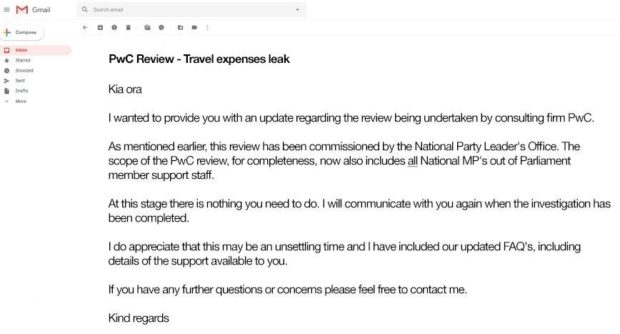 I was planning to ignore National’s civil war and write something about the Government’s bill to stop the issue of of further permits for offshore oil drilling.

But instead National’s simmering problems created by the very unwise decision to find out who leaked Bridges’ travel expenses has erupted into civil war.

A further leak has revealed that the leak inquiry is being extended out of Parliament staff.

From Mitchell Alexander at Newshub:

A leaked email shows the National Party has widened its investigation into who leaked Opposition leader Simon Bridges’ travel expenses.

The email shows National staff were told on September 25 the investigation will include those who don’t work in Parliament.

“The scope of the PwC review, for completeness, now also includes all National MP’s [sic] out of Parliament member support staff,” the email informs staff. The word ‘all’ is underlined.

Investigators will be looking for “two specific documents and related emails accessing and/or referencing either/both of these two documents”.

They are also focusing on communications with a specific phone number.

The email acknowledges it “may be an unsettling time”, and reminds staff counselling is available through an independent third-party organisation.

Screen shots have been provided.

And the media is starting to seriously question the viability of Bridges’s leadership.

Duncan Garner has asked why Bridges used the word “embarassing” when describing Jami-Lee Ross’s leave causing condition.  For possibly the first time ever Mike Hosking has said something I agree with, describing the National leader as “bumbling Bridges“.  And Tracey Watkins, hardly a Labour friendly reporter has said this:

If there were seeds of doubt in Bridges’ judgement before among his MPs, they must have blossomed into full grown dismay that Bridges’ decision to order an inquiry keeps blowing up in his face.

Tuesday’s train wreck of a press conference dealing with the abrupt departure of front bench MP Jami-Lee Ross on personal leave must have only deepened their dismay.”

At this rate the leader’s budget will soon be extinguished because of the need to hire high cost lawyers and accountants to find out who is continuing to leak information.  The National Party caucus cannot be a very happy place right now.