It seems that after 9 years the general population’s tolerance of National is declining and the excuses are not working.  Smiling and waving and hollering “its Labour’s fault” is no longer working.

Crime and policing are particular weaknesses for National.  Its primary economic policy, rampant immigration, is squeezing the ability of the state to provide the same level of care as it has in the past.  A freeze on government departmental spending is an effective cut as existing budgets are meant to be spread over an ever increasing population.  And nowhere are the repercussions more apparent than in the area of law and order.  As Deputy Prime Minister Paula Bennett discovered yesterday.

The deputy prime minister faced a hostile crowd, fed-up with escalating crime, when she visited Thames.

Paula Bennett, who is also police minister, held a public meeting on Wednesday at the Thames War Memorial Civic Centre to discuss residents’ growing concern about assaults, burglaries and drug offences in the area.

The meeting was a full-house with many voicing their frustrations and holding signs saying they had “more teeth than the NZ police”.

Thames High School student Paris Lee, 17, told Bennett a friend of hers was recently hospitalised with concussion after being attacked by other students.

Paris said she was concerned the police couldn’t do anything to help.

The article mentions other complaints made at the meeting all indicative of the local police being inadequately resourced to do their job.

National needs to wear this. An article in Stuff from last year shows why police are finding it more and more difficult to do their job. Note how when Labour came into power the number was high, but as time went by numbers were reduced down to 1 in 500. Note also how since 2009 the ratio has again risen.

And there is a direct measurable consequence to this penny pinching.  Clearance rates for offending has gone up.  Following is a further graph from the article showing offence clearing rates over time. 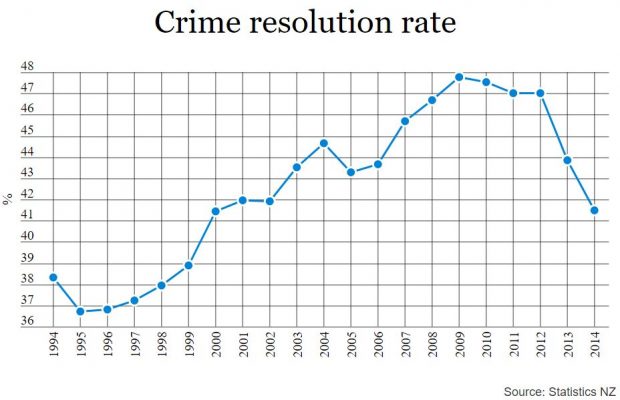 Clearance rates increased considerably last time Labour was in power.  Since 2009 they have worsened and have plunged since 2012 which is the same time that the police population ratio declined.

Labour and New Zealand First have previously announced policies to increase police numbers.  National has promised to do the same but it is clearly playing catch up.  The more it moves to mimic the effect of announced opposition policies the more desperate it looks.