It appears that every few days a new capital gains tax horror story is going to emerge from within National’s research unit.

A few days ago it was the effect on Kiwisaver accounts. The latest concerns farming. From Benedict Collins at Television New Zealand:

“A raid on regional New Zealand” – that’s how the National Party is describing the proposed Capital Gains Tax to anxious farmers.

In Otago today, farmers met with National’s agriculture spokesperson Nathan Guy who warned a suite of new taxes could be on the way.

“Tens of thousands of farmers up and down the country are outraged by this [Tax Working Group] report,” Mr Guy told 1 NEWS.

Holy hyperbole.  And I thought that the report was a series of recommendations for the Government to consider.

It is not as if Farmers farm for a tax free capital gain which they pocket when they sell and which they should pay tax on anyway. If they bought the farm with the intent of selling it at a profit they would have to pay tax on the profit any way.

“To some extent it’s to set up your financial security by having a pot of gold at the end when you sell the farm.”

“Having worked my way up to where I’m at having traded a few properties and working hard and making short term sacrifices it would be very disappointing to find that the government then takes a third of it when I sell it.”

It is only proposed by the TWG that a third of the increase in value excluding renovations from a nominal date in the future would be taxed.

National calculates that the average sheep and beef, or dairy farmer – could have a $600,000 bill to pay if they sold their farm 10 years after a 33 per cent CGT is introduced.

That assumes the property went up in value by more than $1.8 million over that period.

The assumptions are heroic if you look at what has happened in the past decade.  Farm prices which peaked in 2008 then post GFC declined dramatically and have only gradually recovered since then. If a similar increase occurred then National’s calculations are approximately right but it has relied on cherry picking a low starting point.

And even mainstream economists are wondering how fair this is:

… economist Cameron Bagrie, said that raises issues of fairness. “If the farm’s going to go up – as they’ve put up $1.8 million over the next 10 years – that’s $180k a year – that’s more than double the average family income and that’s untapped money so there’s a big strong fairness argument that people should be paying tax on that capital gains,” Mr Bagrie said.

Bagrie is right.  This is an industry that farms capital increases for profit. Why should it not pay tax on the profits it makes?

There are other problems with the Farming industry.  Like the destruction of precious parts of our environment such as waterways and the fact that the industry pumps out half of the country’s greenhouse gas emissions.

Which is why the TWG made this recommendation:

This could involve both removing harmful concessionary provisions but also introducing positive incentives.

If you want confirmation that Farmers are engaged in the farming of capital gains how about this graph from the TWG report: 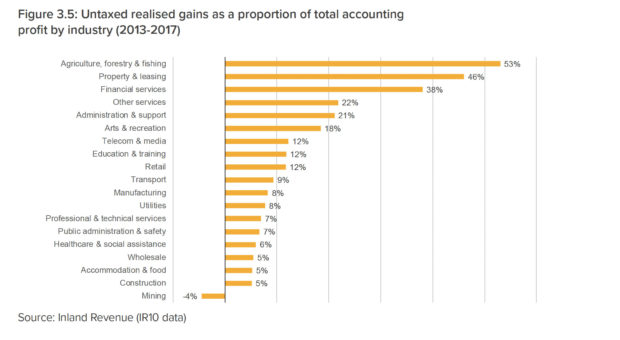 Over half of the total profit in the Agriculture, Forestry and Fishing industry is untaxed capital gains.

Rod Oram says this about the graph:

Once again, the chart above sheds light. The primary sector generates 53 percent of its profits from untaxed realised gains, mainly from escalating land values, the highest percentage of any sector.

But farming mainly for capital gains rather than operating profits only pushes the cost of farms up far faster than the price of the commodities many of them produce. For example, the global market-clearing price for whole milk powder has been around US$3,500 a tonne for more than a decade. Yet, the average price per ha of dairy land rose by 97 percent from December 2003 to December 2018, according to the Real Estate Institute’s Dairy Farm Price index. Moreover, the price is very volatile, which creates winners and losers among farmers. With a CGT, farmers would offset capital losses against capital gains. Now they simply have to live with the losses.

There is a serious debate to be had about our current tax system. And an industry that receives so much state support by way of infrastructure and causes so much environmental damage ought to be paying its fair share in tax.

Which is why the debate about a CGT is an appropriate one to have.