Fresh from having to delay the sale of Mighty River for 6 months because of sheer incompetence and on the back of hundreds of jobs losses in our largest employing sector – manufacturing – Key went overseas to boost our exports. His Russian FTA talks were a dismal failure (wonder why) and, now, he’s re-heating a failed attempt to boost tourism.

Key, remember, took the Tourism portfolio because he was such an amazing deal-maker that he would get the sector growing. 22 months ago today, he announced a plan to boost Japanese tourism. Today, he’s doing it again. How’s it working out? 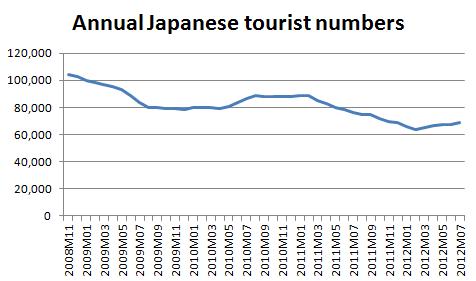 A 34% fall in Japanese tourist numbers under Key. It’s not restricted to Japan and, to be fair the decline in real terms in tourism revenue started in 2004 and has fallen 24% in real terms since then (14% since 2008). But Key took the role because he’s supposedly so awesome that he could turn things around. He’s done exactly the opposite.

Now, Key’s criticising Australia – the place that 1,000 Kiwis are week are fleeing to because, for the first time in 20 years, unemployment is lower there then here. He says it has ‘Dutch Disease’ – the economic condition where spending up big on the back of a boom in exports of a commodity raises the exchange rate and kills the rest of the export economy, leaving the economy hollowed out when the boom ends. Of course, New Zealand has dairy Dutch Disease. And government policy is to make us more dependent on boom-bust commodities by intensifying dairy and hydrocarbon extraction – just like Australia.