Regular readers of The Standard will know that a primary driver of crime is joblessness.

It’s no surprise, therefore, to see that crime went up in the last year. Fewer jobs to go around = more crime. Crime is a symptom of socio-economic distress. It is not, primarily, ‘bad’ people behaving badly because they are inherently bad.

How I with someone would tell the government that. They are stuck in this dark ages delusion where people who do bad things are bad people and the way to stop them is to give them a beating and scare them into toeing the line.

John Key’s reaction to a higher homicide rate and a 3.5% jump in crime was ‘well, there will always be some bad people out there’. Perhaps,but that doesn’t explain an increase under his watch, especially when his government was elected on a promise of bringing crime down. 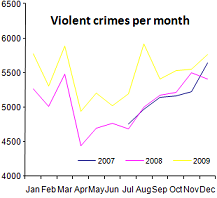 National pledged to reduce crime but they are failing to do so. Judith Collins says that we can’t know if their policies were effective because some only started in September. Not true. We can see their ineffectiveness already.

National is failing to keep yet another promise because they fundamentally misunderstand crime. At the insistence of Pita Sharples, the government held a conference on the causes of crime last year.It identified poverty and associated deprivation as the leading causes. Employment in decent work is the solution. But it’s like it went in one of National’s ears and out the other. They persist with bone-headed ‘tough on crime’ policies that fail to do a thing, and more Kiwis become victims of crime.

Welcome to the brighter future.

45 comments on “Nats fail on crime”