Pointing out that a “rich get richer” budget is going to increase inequality in NZ seems to be making the Nats uncomfortable. Bill English:

A Budget that delivers thousands a week in tax cuts to the super wealthy and a few dollars to those on the minimum wage will leave the gap between rich and poor “about the same”, Finance Minister Bill English said yesterday.

“Basically” the same and “about” the same mean “not” the same don’t they Bill. The gap between rich and poor will increase – that’s what happens when you give big tax cuts to the rich (see the excellent No Right Turn). Why so evasive about it?

“We’ve achieved a shift in our tax system without making that problem significantly worse in a static sense.

Not “significantly” worse? “In a static sense”? Why the weasel words? Why not have the courage of your convictions, and just come right out and say it, like Michael Laws:

On Thursday, this Key/English administration decided to abandon the pretence that we are an egalitarian society, or that we should ever attempt to be so.

That’s what Bill wants to say too. Screw inequality – too bad. The reason he can’t is that inequality is so provably damaging to society. I wrote about this before the budget, here’s the take home message (from “The Spirit Level” by The Equality Trust): 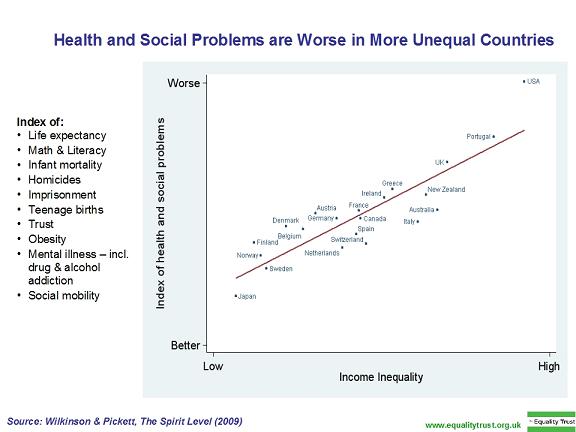 Over a huge range of important social indicators, the more unequal a society is, the sicker it is. The facts are well known, and so post-budget inequality is becoming an issue. Bill’s only choice is to wave his arms about and try to deny the obvious.

But he isn’t the only one. Into the breach leaps the comically ill prepared National spinster DPF:

So I reject many measures of income equality as unsophisticated and even counter productive.

DPF would rather flee the issue and waffle about something else. Imagine my surprise.

The measure that I would like more emphasis placed on is social mobility.

Unfortunately for DPF, this topic isn’t going to work out very well for him either.

In a society with very low levels of social mobility, I can understand why reducing inequality is more important. But in a society which does have opportunities, I want the emphasis to go increasing social mobility, rather than merely the blunt instrument of inequality. If you take inequality to extreme measures, then you end up like the old USSR where cleaners and surgeons get paid much the same.

The data on social mobility in NZ is fairly sparse partly because you have to measure it over extended periods of time. But that is where I would like more focus to go.

Don’t worry DPF, there is NZ data and we’re here to tell you about it! Last year Marty G wrote about this Stats NZ data. Short version – not a lot of income mobility in NZ over recent 5 year snapshots. But you don’t have to read The Standard – even the business section of The Herald could have told you about the links between inequality and mobility in NZ:

Also, social mobility is lower in countries with high inequality, such as Italy, the United Kingdom and the United States. New Zealand comes in at number 6 on the list.

The picture is pretty consistent internationally. From the OECD:

Countries with a wide distribution of income tend to have more widespread income poverty. Also, social mobility is lower in countries with high inequality, such as Italy, the United Kingdom and the United States, and higher in the Nordic countries where income is distributed more evenly. 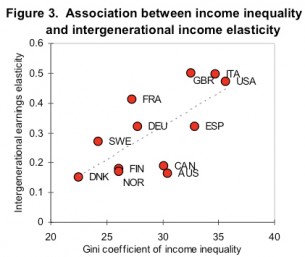 There is a strong positive relation in a cross-section of twelve OECD countries between the extent of intergenerational earnings mobility and income inequality (Figure 3). In general, the countries
with the most equal distribution of income at a given point in time exhibit the highest earnings mobility across generations.

There are any number of academic studies with the same message:

We investigate the relationship between inequality and intergenerational mobility. Proxying fathers’ earnings with using detailed occupational data, we find that sons who grew up in countries that were more unequal in the 1970s were less likely to have experienced social mobility by the late-1990s.

Or see The Economist, or hell, even Wikipedia.

So, Sorry Bill, but your half-assed denials don’t even begin to hide the truth. Your tax cuts for the rich will make this country a more unequal place, and inequality is hugely damaging to society. And sorry DPF, your lame attempt to shift the focus to social mobility instead only lands you in even deeper hot water, as inequality and social mobility are inexorably linked.

Nats – you’re floundering about with this issue because you can’t acknowledge the truth. The truth is that you don’t give a dried and salted rat’s anus about inequality. It isn’t on your radar. You don’t care. If you cared, you’d be making things better, not worse.

35 comments on “Nats floundering on inequality ”