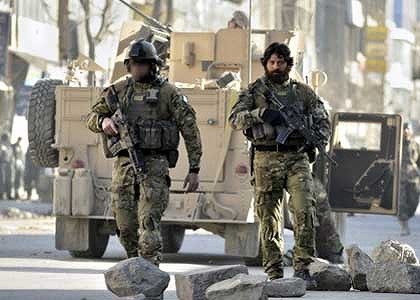 In the beginning New Zealand contributed to the Afghanistan War with noble intent and notable heroism. They built schools, rebuilt parts of towns, did good humanitarian work. This is particularly the case in Bamiyan, where New Zealand led the Provincial Reconstruction Team – our biggest deployment.

New Zealand also deployed the SAS in 2001 and Willie Apiata later won the Victoria Cross for actions in 2004.

But consistently it started turning sour, both for New Zealand’s effort and for the wider campaign.

Both Australian and New Zealand armed forces got pulled into a moral morass of military defence and retaliation. In New Zealand’s case Sir Geoffrey Palmer led the commission of inquiry and former Supreme Court Judge Sir Tom Arnold was highly critical of the NZDF but found that the operation in which there were civilian casualties had been justified under international law. The other casualty was Nicky Hager whose home was raided by the Police. After the damage had been done to our civil liberties he got an apology.

Like the Prime Minister I want to honour the intent and effect of NZDF men and women who sought to make communities in Bamiyan more secure and to put in place elements of an improved future.

Did we do any good? Reports of how well we did in assisting Bamiyan are hard to find and honestly are unlikely to find the light of day now as this NZHerald note attests.

Too often we stumbled.

Every military intervention is hard, gets more complex, and rarely plays well in the media. Ten of our soldiers are dead, and many more wounded. I’ve never been a soldier so I am loathe to criticise our overall effort.

We were a small part of a longstanding United Nations-mandated effort at national reconstruction now coming to rapid conclusion.

And yet here we are 18 years later and it’s time for the results. It’s as bad as it can be.

The great majority of all of this military and reconstruction effort was from the United States military.

More than 2,300 U.S. personnel have lost their lives there; more than 20,000 others have been wounded. The United States government has spent close to $1 trillion on the war.

At least half a million Afghans – government forces, Taliban fighters and civilians – have been killed or wounded. Just a few Afghanis have found their way to New Zealand and settled as refugees.

The United States-led military effort has been unable to end the violence or hand off the war to the Afghan authorities. There’s no bargaining power left for the United States as Afghanistan is left to itself once more.

I’m not going to do a counterfactual of any kind about what kind of United States-led intervention or U.N.-led institutional effort might have been better. Too easy.

But here’s the bookends: after the 11 September 2001 attacks on the United States, Washington forcibly removed the Taliban from power. 17 years later, President Donald Trump signed a peace agreement with the Taliban. However the muteness of that agreement on the future of power sharing, rule of law, and women’s rights have left a forecast of chaos at least as enduring as that formed through war.

That’s an exceedingly poor result for that amount of cost of time, money, and effort.

Many of Afghanistan’s remaining educated people continue to leave, as they did once the Soviets left many decades ago. The country has still not found peace. People have lost faith in institutions, tend only to trust people from their own tribe, and tend not to trust offers of international assistance.

Even after 18 years of what was by the end fairly small New Zealand service, I’m too depressed writing this to even come to any conclusions.