Sir Roger Douglas has a go at my post that looks at the GDP per person gap between Australia and New Zealand and concludes that, since it doubled during the neoliberal revolution of the late 80s/early 90s, implementing more neoliberal policies is unlikely to close that gap.

His first complaint is that my numbers and his don’t match up exactly. 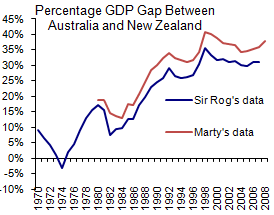 My data is here on the IMF World Economic Outlook database. Sir Rog got his from the OECD. They don’t differ in trend, only in scale, and I suspect that’s because the IMF ones take into account Purchasing Power Parity and his don’t (if you’ve ever been to Aussie you know that just because your $1 NZD buys 80 cents AUS doesn’t mean that what costs $1 here costs 80 cents there, PPP adjusts for the difference). Next.

“the increasing size of the gap between Australia and New Zealand between 1984 and 1992 is easily explained by the fact that we had rising unemployment. Of course, some may blame this on the reforms, but I think a more plausible story is that the inability of the fourth Labour Government to deregulate the Labour market created unemployment problems. That is why, after the passage of the Employment Contracts Act, unemployment fell from almost 11 percent to 6 percent in just 4 years. “

Why did we have rising unemployment during the neoliberal revolution? Because the neoliberals were sacking huge numbers of workers and screwing up the economy. We don’t need to go making fanciful assumptions when there is such a simple explanation. To credit the ECA with a slow reduction in unemployment from the record highs the revolution had created is spurious. Unemployment had been as low, in fact lower, than 6% for most of the time since records began before the neoliberals starting their experiment, ie we were able to achieve low unemployment before the ECA. It went up to a record of 11% while they were tinkering and dropped when they stopped. Unemployment only got really low (to levels that were normal pre-neoliberalism) after Labour partially repealed the ECA with the Employment Relations Act and focused on getting people in jobs. Finally:

“Third, everyone is aware that policy does not have immediate effects. Take Working for Families. In the first year, it was given to just 39,000 adults. Today it is estimated to go to 688,000 adults. Policies take time to have a full effect be they good or bad.”

Ah, the ‘time delay’ play. Select a point in time when things are looking better and say ‘look, that’s due to what I did ten years ago’. Does he have any actual evidence that a plateauing of the GDP per capita gap years after he implemented his policies was due to his policies? No. The big neoliberal policies had an impact straight away. When Sir Rog and his cronies sacked tens of thousands of New Zealanders, that reduced GDP immediately both because their output was lost and because their expenditure decreased leading to more layoffs. When the National government slashed benefits several hundred thousand people had less money to spend straight away, which had a multiplier effect throughout the economy. We can see the results there in the graph.

The example of a supposedly ‘delayed effect’ that Sir Rog gives is purposefully deceptive. The number of people on Working for Familes increased because its scope was widened, not because it took time for the policy to filter through. It says something that Sir Rog’s only example a) doesn’t show what he claims b) isn’t a neoliberal revolution policy.

This guy really convinced us to sell the family silver with cheap tricks like these? Guess it was easier when the voters didn’t have access to the numbers themselves.