Nick Smith is a disgrace 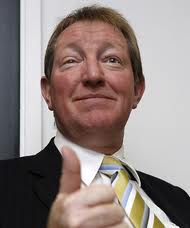 Nick Smith is one of Bill English’s best mates.  If not for this I suspect he would no longer be a Minister of the Crown.  Because his performance as a Minister is pretty abysmal, even by National standards.

Just consider his handling of the latest round of Resource Management Act changes.

National has a real thing about the RMA.  According to National it is a communist inspired system that prevents entrepreneurs and landowners from enjoying their rights to become rich, rich, rich and causes Auckland’s housing crisis.  The crisis has nothing to do with the huge number of people immigrating to the city, it is all the fault of socialist city planners and the RMA.

National has had a few goes at gutting the RMA during the current term.  It has done weird things like remove protection from urban trees and talk about simplification of the system while making things more complicated.

After eight long years you would have thought that it had made all the changes that it needed to.  But Smith is having another go at the legislation and this latest one is a real doozie.

The latest attempt at reform, a word used in the loosest sense of the word, has so far been a text book example of undemocratic and poorly thought through reform.  Its justification was that the existing law was making it much more expensive to build houses and apartments and that all we needed was a few law changes and everything would be fine.

It has many provisions that if enacted would complicate, not simplify the system.  And it represents a centralised power grab Rob Muldoon would be proud of.

But Smith has had problems with getting the proposals passed.  Essentially every party in Parliament except National thought the proposed reforms were a terrible idea.

The bill was reported back recently.  The opposition minority reports are as scathing as I have ever read.

Labour criticised the bill for a number of aspects including draconian ministerial regulatory powers to override plans and control consents, and to limit rights of participation.  About the ministerial regulation making powers it said:

These are tantamount to a return to the National Development Act 1979, and are on the spectrum of the patently excessive regulation-making powers abused under the former Economic Stabilisation Act 1987.

The bill also overrides, and allows the Minister to further override local and district council functions in such a broad and fundamental way that it overturns the traditional division of power and roles between central and local government.

The content was not the only thing to be criticised.

The process for passage of this bill has been shambolic, and that is no fault of the committee. The bill was referred to our committee 14 months ago on 3 December 2015. We advertised for submissions and heard them in the new year.

We heard a total of 137 submissions in Wellington, Auckland, and Christchurch. Many were complex with enormous effort from submitters. Those submissions exposed many, and major, flaws with the bill.

We finished hearing submissions on 2 June 2016. The departmental report was delayed month upon month, with numerous provisional time periods passing. Two extensions to the report-back date were obtained from the Business Committee. Further delays followed. The committee was told this was because Cabinet had not signed off proposed changes to policy positions in the bill as introduced.

Although not confirmed by officials, it was apparent that much of the delay was because the National Government has not had the voting numbers to pass the bill in the House, even if it uses its majority at this committee to force the bill through select committee.

The many months of delay have meant that some members of the committee may have forgotten details of many of the submissions heard many months earlier.

The second-stage departmental report, which the committee only had in draft form until 2 November 2016, ran to over 400 pages.

The Executive plainly could not make up its mind on what it wanted to do, and was consumed by horse trading behind the scenes. The select committee process was being abused.

Government committee members displayed an unwillingness to make whatever changes they believed were necessary, preferring to await direction from the Executive via the long-delayed departmental report. This is a worrisome trend on some committees, where even relatively minor decisions are increasingly given across to the Executive. This delays committee processes, and underutilises the skills and ex-perience of committee members, who after all are the ones who hear the submissions on bills.

And to top things off National members tried to block the inclusion of a minority report when the bill was reported back initially because of time constraints.  How undemocratic can you get?

The Labour opposition members were blocked by the National Party members from including a minority report, which had been prepared and submitted. The National Party members also blocked any report from the committee as a whole, which had been prepared by committee staff. National members took this course after the Clerk of the House of Representatives had been called to the committee, when he advised it would be highly unusual for the majority to block a minority report, and highly unusual for the committee not to report to the house about its proceedings on the bill. The motions were on notice.

As a consequence, the bill was reported back to the House without amendment and without any report from the committee on either the delayed process or the substance of the flawed bill.

The Government then did a deal with the Māori Party and had numbers to get the changes through Parliament.  In an unusual move the bill was sent back to the select committee for further consideration, and major changes resulted.

The bill was not readvertised. The complexity of the changes in the 400 page departmental report were substantial and amount to an effective rewrite of substantial parts of the bill. This is shown by the myriad amendments shown in the version of the bill now being referred back, and the months of redrafting required from Parliamentary Counsel Office.

The bill still contains some of the most controversial measures such as the ability of Smith to override District Plan provisions by regulation.

And one of Nick Smith’s porkies is highlighted in the minority report.

There are clearly extensions to the Minister’s regulation-making powers under the bill. The Minister said on Radio New Zealand on 1 February 2017 that “…there is nothing in the Resource Legislation Amendment Bill before Parliament that makes any changes in respect of the way genetically modified organisms are regulated in New Zealand.” This is patently incorrect. Court decisions have found that RMA plans can legally include rules relating to the use of genetically modified organisms, and that the Hazardous Substances and New Organisms Act 1996 is not a code. The bill introduces a new regulation-making power for the Minister to override those plan rules. The Minister is wrong to assert the contrary. He is also incorrect to assert this as being the same as national direction under national policy statements or national environment standards. Obviously if there was no change being made, the new regulation powers would be redundant.

The Greens were also scathing about the bill in their minority report.

The RMA is a crucial foundation of New Zealand’s environmental law and planning system. Changes to it should be based on sound analysis and evidence and have broad cross-party support so that they are enduring. The bill has neither. Many of the changes appear driven by ideology and anecdote, rather than robust analysis and evidence.

The bill attracted 647 unique submissions and 94 form-style submissions, many of them critical of its fundamental aspects. Many included detailed technical analysis of the bill’s clauses and their implications, and represented a significant investment of time and expertise by submitters.

Resource users such as Fonterra, quarry operators, and infrastructure operators such as airports made similar points in opposition as environmental interests such as Fish and Game New Zealand, the Environmental Defence Society, and Forest and Bird.

Federated Farmers, for example, described the proposed Ministerial regulation-making powers as “excessive” and the provisions which allow central Government to intervene directly in local council plans as “heavy handed”.

Sir Geoffrey Palmer, presenting evidence for Fish and Game, described the regula-tion-making powers which would override the provisions of regional and district plans as a “constitutional outrage”. “Due process is replaced by Executive fiat.”

The Greens also chose to give the process a shellacking.

Through no fault of the committee or its chairperson, the process for considering the bill has been a shambles. The Executive has dominated the select committee’s consid-eration of the bill and stalled progress on it. Hearings on public submissions ended on 2 June 2016, yet officials were unable to provide the select committee with a full departmental report for some five months. The Minister’s influence on the content of the departmental report, and when the committee should receive it, has compromised an effective committee process. It has cut across the committee’s ability to consider submissions and potential amendments in a robust and thoughtful way. Officials repeatedly told committee members that provisions in the bill (such as a national planning template which determines plan content and not just structure) were “policy issues”. The strong implication was that there was no scope for them or the select committee to recommend changes.

They also chose to criticise the changes for making things more complicated, not less.

The bill’s changes to notification were seen almost universally as making the RMA more complicated. There was a consistent and widespread view among submitters that the RMA’s notification procedures, as amended in 2009, were working well with no need for further changes or more limits on public involvement. Many submitters were concerned about the bill providing for blanket non-notification of controlled activities, restricted discretionary and discretionary boundary infringement, and most subdivision and residential activities. For example, not all neighbours are likely to be consulted about developments which infringe on the boundary.

The Green conclusion is as bleak as the Labour conclusion.

The bill is not fit for purpose. It significantly increases ministerial powers while removing or restricting basic rights of public participation. It will expedite development activities with few environmental safeguards and scant consideration of sustainable management. The bill puts private rights and development ahead of the public interest and environmental and community well-being. It should not proceed.

The NZ First report did not waste words.  This is it in its entirety …

New Zealand First strongly opposes every part of the bill. A detailed minority view is therefore pointless. New Zealand First also deplores the extremely poor process by which the bill has been considered by the committee.

For all of these reasons, everything reported in the committee’s report will not be supported by New Zealand First.

Smith is a disgrace.  His willingness to sacrifice all pretence of acting in the public good so he can claim the Government is doing something about the housing crisis is now clearly evident.  Time for him to go.

32 comments on “Nick Smith is a disgrace ”