NATO leaders are discussing a no-fly zone over Libya to prevent the crumbling Gaddafi regime bombing and strafing protesters. Gaddafi’s loyalists are tied up keeping Tripoli under control, and the opposition is preparing to send in troops. Meanwhile, the big question elsewhere in the Arab world is what will happen on Saudi Arabia’s March 11, ‘Day of Rage’? 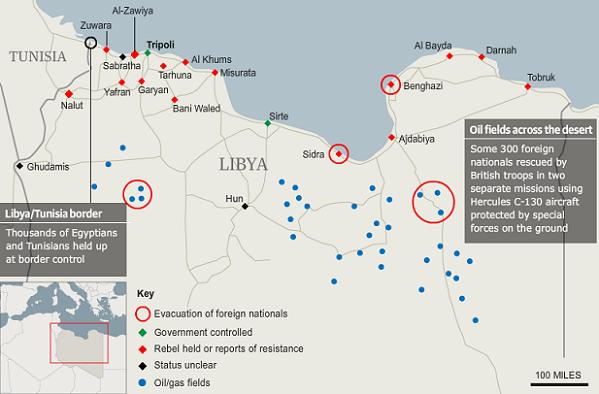 The capital is home to a third of Libya’s two million people and the revolution that has swept nearly the entire rest of the country cannot succeed until Tripoli falls too. Unrest in the city is being contained, for the most part, by a very heavy military presence, which seems to be taking up most of the loyalists’ remaining military resources.

The quicker this is over, the better for the Libyan people. To do that, the rebels need to bring in forces from towns they control to help wrest Tripoli from Gaddifi’s loyalists. But the loyalists control the remaining Libyan Air Force, which makes it hard for the rebels to move large numbers of vehicles and soldiers between cities.

UK Prime Minister David Cameron is proposing a no-fly zone over Libya and other NATO leaders have discussed it too.

Presumably, the UK and Germany have already been enforcing de facto no-fly zones during their rescue missions for expat oil workers in the Libyan desert. It seems unlikely they would send in Hercules with special forces on board without any air support. But there is no complete barrier to the remaining loyalist airforce mounting sorties – on Monday, they reportedly bombed an arms dump held by the rebels.

If the UK and other countries are serious in saying that Gaddafi must go, then the least they can do is protect the rebels with a no-fly zone. It wouldn’t even mean actual combat, necessarily – it’s unlikely the Libyan Air Force would dare to take on patrolling NATO fighters – and removing the loyalists’ air supremacy would definitely help turn the tables in favour of the rebels and allow them to move forces from the eastern cities to assist their comrades in Tripoli. There is probably no need for NATO to bomb loyalist targets (and too much risk of hitting civilians) and certainly no need to send in ground troops. This is the Libyans’ fight for their freedom, but NATO can and should give them a hand-up with a no-fly zone.

While Libya has been the most dramatic of the Arab revolts, it is hardly the only one underway. Protests are growing, and the government is cracking down harder, in nearly every Arab country.

The markets are nervously watching for any threat to Saudi oil supply. Protests have occurred in the Saudi Arabian city of Jeddah on the Red Sea and in Qatif, the region that produces most of Saudi Arabia’s oil. So far, these protests have been small-scale but a ‘Day of Rage’ like the one that sparked the Egyptian revolution is planned for March 11. The Saudi monarchy takes this threat very seriously – it has announced US$36 billion of spending and benefits to try to placate its people.

We’re already in an oil shock that has possibly sent the world back into recession but trouble in Saudi Arabia would make current petrol prices look cheap. Nonetheless, we must support the Arab people’s bid for self-determination. For 50 or more years they have been ruled by people who  have offered the West ‘stability’, now the people must have the chance to rule themselves.