No pay rises under Nats

St. Augustine said “Lord, give me chastity, but not yet”. Was reminded of that reading the Tories’ reaction to Labour’s work and wages policy. Tories say they want you to have higher wages. But not yet. It’s always later. Once you’ve earned it. In the ‘brighter future’. And they’ll scream blue murder any time you demand what you deserve today.

They know that, at the end, the question of wages is how to divide the pie between workers and capitalists. More for one means less for the other. And their whole project is about securing, protecting, and enhancing the privileges of the capital-owning elite.

The results of National’s ideology are lower wages when they’re in government. 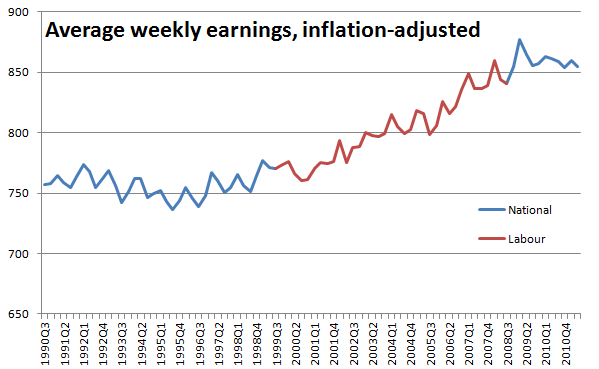 (from the Quarterly Employment Survey. Somewhere in an old post is a graph showing wages took until 2002 or 2004 to get back to where they were in the mid-80s when they peaked)

I’ll let you in on a secret: we’re never going to be a high wage economy if we reject every proposal to raise wages.

I’ll give you a second one for free: we’re not going to catch Aussie wage rates, or even get the same share of output going to workers, if we refuse to adopt the labour laws that created their wage rates.

The last is a good one. Right now, if you work in unionised workplace you can be earning twice what someone down the road doing the same job in a place that isn’t unionised earns. That just ain’t right. The Tories reckon the market will sort that out – supply and demand, market equilibrium blah, blah. It’s not true because the differentials exist. And if you’re in a unionised workplace, you were almost certain to have gotten some kind of pay rise in the last year. If you’re not, you probably didn’t.

So why doesn’t everyone unionise? It isn’t that simple. The system’s set up against it. Individually negotiating with each employer, especially in industries with lots of small employers, can be prohibitively expensive for the dues unions can raise. The big sites get unionised. Small ones, not so much. And some organisations actively thwart unionisation of their workforce. It’s a bloody tough thing to stand up to your boss in a time of recession and unionise. Especially if you’re under the 90 Day Fire at Will law.

The good bosses and their workers get screwed. They can’t afford to raise wages too much or they’ll get undercut by the bad bosses.

Just like the Fire at Will Bill is a bastard’s charter, with the bad bosses pulling down standards and forcing others to match them to stay competitive, so the current wage bargaining system lets bad bosses set the floor and drags down everyone else.

Industry standards will be an agreement between employers and workers’ unions facilitated by the government to set minimum pay and conditions standards for the industry based on the industry average. Allowance will be made for small employers who have geniune difficulty reaching the standards. Unionised sites will still be able to bargain for improvements on those standards.

But the important bit is it disempowers the bastards who run low-pay models. These are the people keeping us back as a country. Under Labour, they will have to compete fairly with their counterparts, rather than winning by screwing over their workers to make a profit.

These kind of industry standards models work in many different countries. Actually, some countries don’t have a general minimum wage, they just have industry standards setting minima. Countries were the pay is higher and the share of output that workers keep is higher. Countries that have stronger growth because wealth is more widely distributed, not hoarded by a tiny elite (to the same extent it is here).

If we want to be a high wage, wealthy country that attracts and retains people, we need to copy what works.

And we’ll all be winners from that.

81 comments on “No pay rises under Nats ”