No tax cut for most from Nats

As predicted on The Standard, National has announced it would abolish the increases in the bottom threshold to pay for tax cuts for the rich. Here’s a break down of what would happen:

What wouldn’t happen – the parts of Labour’s tax cuts that would be replaced:

So, where does this leave you? Here’s the difference in National and Labour’s tax cuts across income levels (above 100K, National’s cuts keep rising, Labour’s plateau at 80K): 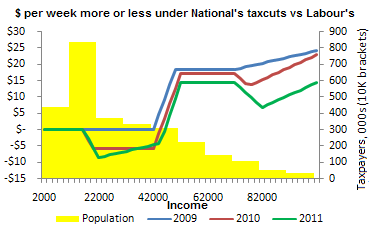 That’s right. Most people would recieve a smaller tax cut under National than they would under Labour. Because the bottom threshold would not be increased by National, Kiwis earning up to $44K, some 2.4 million people, would get the same or larger cut from Labour. But the ultra rich would recieve much more from National. Someone on $250K a year (a Leader of the Opposition, say) will get an additional tax cut of $3750 a year from National by 2011.

Now, National has announced a tax rebate – the Independent Earner Rebate – of $10 a week, rising to $15, for people earning between $24,000 and $50,000 who aren’t getting Working for Families, a benefit or Super. Take a look at the graph and you’ll see that will make up for the abolishment of the bottom threshold increases for those people but it will leave anyone on $14,000-$24,000 and anyone getting WfF, a benefit, or Super worse off.

So, tax cuts for the rich, nothing for most of us. Who could have seen that coming?

[in coming posts, we’ll look at the fiscal consequences and how National would fund their cuts – as we predicted, it’s by slashing Kiwisaver]

91 comments on “No tax cut for most from Nats ”