Not a good day for an April Fool’s joke 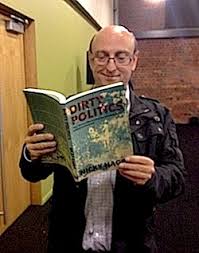 April Fool’s day is one of those customs that seem to survive.  Everyone is aware of it and the first thing that you do when you see an unusual news item on April 1 is to question its authenticity.

Quite often it can be funny.  But today, with the nation battling to hold back a pandemic, does not seem to be a day for certain forms of humour.

Particularly those that suggest that the Government is doing something rather extreme about Covid-19.  Trump’s America shows what happens when misinformation is spread widely.

But National pollster David Farrar thought it would be a good day to suggest that the Government was imposing limits on how far people can walk from their home, with the figure being set at 500 metres for people in urban areas.  And our cellphones would be monitored.

This is actually an important issue.  To stop localised spreads of the disease people should limit how far they travel from their home.  In Dublin for instance there is a restriction, set at 2 kilometers, for people leaving their homes for exercise.

The proposal makes as much sense as energy efficient standards for light bulbs in a world facing climate change.

DPF however thought he would happily foment some mischief.

What is funny is that so few of his commenters realised it was a joke.

First out of the blocks was this comment from some guy whose name was previously apparently offensive:

These are absurd restrictions with no epidemiological rationale to support them. The utterly draconian step of monitoring cellphones tells you everything you need to know. This is a full-blown effort to institute a functioning police/surveillance state which will not be dismantled after the lockdown without a serious fight. I despair that there is not one single voice in Parliament at the moment that could be a functioning component of such a struggle against totalitarianism. Labour and National are well and truly captured by Chinese influence and I suspect that this is a factor in what is happening right now. What we are seeing globally is open warfare of a new and dangerous kind. It is aggressive globalism, i.e., Communism, pitted against resurgent Nationalism. Our Dear Leader, formerly President of The Union of Socialist Youth, a direct offshoot of the 2nd Communist International, is destroying our free culture with the dedication of true cadre.

I’m staggered. This is an outrageous breach of civil liberties. Our so-called leaders have morphed into totalitarian thugs virtually overnight.

It is clear from the nestled comments that it dawned on Farrar’s herd that it was an April fools joke.  But not after some pretty out there comments were made.

The post is in very poor taste.  And as the policy is something that other nations have imposed, discussions about it should be conducted in a respectful manner, and not in the crazed kneejerk response seeking way that Farrar has specialised in.