NZ Institute turns up the heat 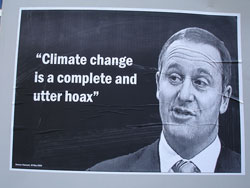 The New Zealand Institute has come out imploring us to be a “fast follower” rather than a leader in the race to reduce greenhouse gases.

John Key was predictably on the spot to take the credit, claiming that the Institute was essentially “making the same point I’ve been making around climate change”.

Wasn’t the point you were making about climate change the fact that it’s “a complete and utter hoax” John? I’m just astounded that Key’s self delusional enough to think that he has any credibility on this issue whatsoever.

Getting down off the fence again, it’s good to see some proponents of the emissions trading scheme getting vocal.

This is going to continue to be a difficult issue for National who are clearly caught between their hard right business lobby and their desire to rebrand themselves as ‘in touch’ on environmental issues. 50 by 50 or whatever their content-short slogan is just isn’t going to cut it.

3 comments on “NZ Institute turns up the heat ”