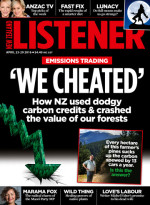 As was well covered in the media this week, NZ under the Key government has hit new depths of ignominy as per capita the world’s biggest climate change cheat:

NZ accused of being a climate change cheat

The accusation comes in a report written for the Morgan Foundation of millionaire philanthropist Gareth Morgan. … In a caustic foreword to the report, Gareth Morgan wrote “we are, without doubt, cheats”.

The report said New Zealand’s real greenhouse gas emissions have gone up since 1990, which was the date they were supposed to start coming down from. But New Zealand could get away with raising its emissions here by paying money to other countries where emissions were actually being reduced.
…
“One type of credit (the Emission Reduction Unit) was overcome by fraud and corruption in Ukraine and Russia,” the report said. “Virtually all of the credits issued by these countries are ‘hot air’ – they do not represent true emissions reductions.”

The report said New Zealand was proportionately by far the largest purchaser of these Ukrainian and Russian credits.

Punching above our weight!

“This was due to deliberate decisions by the National-led Government to – unlike any other country – continue allowing unlimited use of these and other foreign credits for as long as the international community let us.
…
The government has recently banned the purchase of these credits. But the surplus built up earlier as a result of the purchases is allowed to be carried forward.

It was completely amoral to buy these “credits” in the first place. To KEEP USING THEM now they’re busted is even worse.

This enables the government to claim that it will meet its targets for 2020, irrespective of greenhouse gases being poured into the atmosphere every day. …

As far as I know this issue was first identified by I/S at No Right Turn back in December:
Climate change: A policy based on fraud
Climate change: How bad is NZ’s climate fraud?
We summarised with:
NZ and the emissions scams
A week later the Dom Post:
Dealing with criminals in climate fraud

Now we have the Morgan Foundation report, and:

18 comments on “NZ – The underarm bowlers of climate change ”