Depressing reading in this piece by George Monbiot on Canada:

So here I am, watching the astonishing spectacle of a beautiful, cultured nation turning itself into a corrupt petro-state. Canada is slipping down the development ladder, retreating from a complex, diverse economy towards dependence on a single primary resource, which happens to be the dirtiest commodity known to man. The price of this transition is the brutalisation of the country, and a government campaign against multilateralism as savage as any waged by George Bush.
…
In 2006 the new Canadian government announced it was abandoning its targets to cut greenhouse gases under the Kyoto protocol. No other country that had ratified the treaty has done this. Canada was meant to have cut emissions by 6% between 1990 and 2012. Instead they have already risen by 26%.

It is now clear that Canada will refuse to be sanctioned for abandoning its legal obligations. The Kyoto protocol can be enforced only through goodwill: countries must agree to accept punitive future obligations if they miss their current targets. But the future cut Canada has volunteered is smaller than that of any other rich nation. Never mind special measures; it won’t accept even an equal share. The Canadian government is testing the international process to destruction and finding that it breaks all too easily. By demonstrating that climate sanctions aren’t worth the paper they’re written on, it threatens to render any treaty struck at Copenhagen void.

After giving the finger to Kyoto, Canada then set out to prevent the other nations striking a successor agreement. At the end of 2007, it singlehandedly blocked a Commonwealth resolution to support binding targets for industrialised nations. After the climate talks in Poland in December 2008, it won the Fossil of the Year award, presented by environmental groups to the country that had done most to disrupt the talks. The climate change performance index, which assesses the efforts of the world’s 60 richest nations, was published in the same month. Saudi Arabia came 60th. Canada came 59th.
…
In Copenhagen next week, this country will do everything in its power to wreck the talks. The rest of the world must do everything in its power to stop it. But such is the fragile nature of climate agreements that one rich nation especially a member of the G8, the Commonwealth and the Kyoto group of industrialised countries could scupper the treaty. Canada now threatens the wellbeing of the world.

As if all that wasn’t bad enough, the pursuit is of petro-dollars is also tearing Canada apart – quite literally. Most of Canada’s reserves are not oil, but tar sands, “a filthy mixture of bitumen, sand, heavy metals and toxic organic chemicals” which are “being extracted by the biggest opencast mining operation on earth”:

An area the size of England, comprising pristine forests and marshes, will be be dug up unless the Canadians can stop this madness. Already it looks like a scene from the end of the world: the strip-miners are creating a churned black hell on an unimaginable scale. To extract oil from this mess, it needs to be heated and washed. Three barrels of water are used to process one barrel of oil. The contaminated water is held in vast tailings ponds, some so toxic that the tar companies employ people to scoop dead birds off the surface. Most are unlined. They leak organic poisons, arsenic and mercury into the rivers. The First Nations people living downstream have developed a range of exotic cancers and auto-immune diseases.

Sadly of course we Kiwis now have to mobilise to protect our own National Parks from the same madness. Make a start with the postcard campaign described earlier. Don’t let the National government do this to our country… 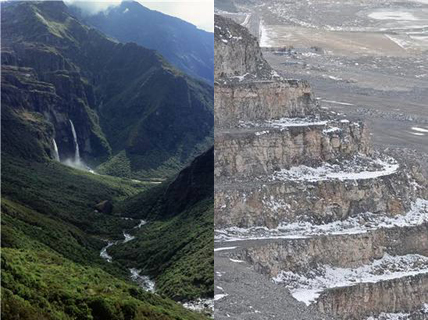