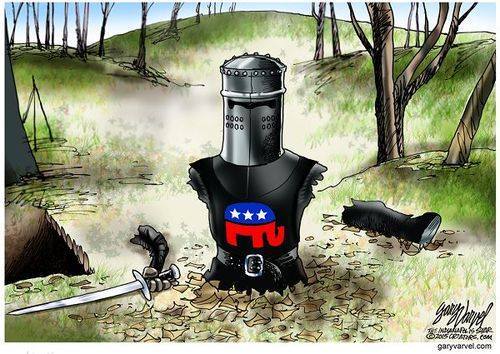 Government ought to be a walk in the park.  But it is not.  Because overnight the US Government started the shut down process because it could not get a vote to continue funding passed.

The United States has its first government shutdown in nearly five years after senators failed to reach a deal to keep the lights on.

An effort by Republicans to keep the government open for one month was rejected in a vote on Friday night after they failed to address Democratic concerns about young undocumented immigrants known as Dreamers.

Republicans needed 60 votes to advance the bill but the legislation only received the support of 50 senators. Five red state Democrats broke ranks to support the bill while four Republicans voted against.

But 12.00am ET came and went without a deal, causing funding for the federal government to lapse. Federal law requires agencies to shut down if Congress has not appropriated money to fund them. Hundreds of thousands of “non-essential” federal employees will be put on temporary unpaid leave. In previous shutdowns, services deemed “essential”, such as the work of the homeland security and the FBI, have continued.

Speaking on the floor after the vote, Senate majority leader Mitch McConnell assailed the shutdown as the result of a “cynical decision by the Democrats”. His opposite number, minority leader Chuck Schumer, delivered a scathing rebuke of Donald Trump, blaming the president for the shutdown. The New York Democrat said Trump “walked away from two bipartisan deals” and that “a Trump shutdown will serve as a perfect encapsulation for the chaos he has unleashed”.

So who is to blame?

Elements of the media will attempt to present it in a balanced way and show fault on both sides and try and present both sides of the argument.  But the Republicans and Trump need to wear this.  They tried to load too many requirements onto the continuation of the funding bill and refused to back down from some of the more extreme positions they tried to get the Democrats to agree to.

President Trump and Senator Chuck Schumer of New York, the top Democrat in the Senate, came close to an agreement to avert a government shutdown over lunch on Friday. But their consensus broke down later in the day when the president and his chief of staff demanded more concessions on immigration, according to people on both sides familiar with the lunch and follow-up calls between Mr. Trump and Mr. Schumer.

The negotiations between Mr. Trump and Mr. Schumer, fellow New Yorkers who have known each other for years, began when the president called Mr. Schumer on Friday morning, giving the White House staff almost no heads-up. In a lengthy phone conversation, both men agreed to seek a permanent spending deal rather than the stopgap measure being negotiated by lawmakers on Capitol Hill.

Less than an hour later, Mr. Schumer was meeting with Mr. Trump over cheeseburgers in the president’s study next to the Oval Office. The White House chief of staff, John F. Kelly, was there, as was Mr. Schumer’s chief of staff, Mike Lynch.

As the meal progressed, an outline of an agreement was struck, according to one person familiar with the discussion: Mr. Schumer said yes to higher levels for military spending and discussed the possibility of fully funding the president’s wall on the southern border with Mexico. In exchange, the president agreed to support legalizing young immigrants who were brought to the United States as children.

Mr. Schumer left the White House believing he had persuaded the president to support a short, three to four-day spending extension to finalize an agreement, which would also include disaster funding and health care measures.

“In my heart, I thought we might have a deal tonight,” Mr. Schumer recalled later on the Senate floor, shortly after the government officially shut downat midnight. At 11:55 p.m., he had been greeted with a blistering White House statement that “Senate Democrats own the Schumer Shutdown.”

The fear is that the Republicans do not care if the Government is shut down.  Their party is full of people who wish to starve the state then drown it in a bath tub.

Just shows that you can have all the cards and lose if you don’t know what you’re doing.