The second in what may be a series of posts about the Occupy Wall Street / Occupy Together movement.

The Occupation, now into its third week, seems to be growing.  As is the Police response.  In the latest development:

In a tense showdown above the East River, the police arrested more than 700 demonstrators from the Occupy Wall Street protests who took to the roadway as they tried to cross the Brooklyn Bridge on Saturday afternoon.

The police said it was the marchers’ choice that led to the enforcement action.

“Protesters who used the Brooklyn Bridge walkway were not arrested,” Paul J. Browne, the chief spokesman for the New York Police Department, said. “Those who took over the Brooklyn-bound roadway, and impeded vehicle traffic, were arrested.”

But many protesters said they believed the police had tricked them, allowing them onto the bridge, and even escorting them partway across, only to trap them in orange netting after hundreds had entered.

“The cops watched and did nothing, indeed, seemed to guide us onto the roadway,” said Jesse A. Myerson, a media coordinator for Occupy Wall Street who marched but was not arrested.

Interesting to read the account of a journalist caught up in another Occupation protest event and jailed:

On Sept. 24, while working on a story about citizen journalism for my employer, I found myself arrested, along with many other people. My arrest gave me a unique vantage point on the risks and rewards of citizen journalists, those non-professionals who capture stories (usually without pay) using videos and images via portable technology like a cell phone camera. Anyone, even a passerby or a police officer can be a citizen journalist. That’s its power. …

As more people spilled into the street, police started to demand that protesters stay on the sidewalk. But as people seemed to be retreating from harm’s way, police began pushing the protesters. I saw police use large nets to corral people en masse. I watched as police pepper sprayed several young women in the face. (An NYPD spokesperson confirmed the use of pepper spray to MetroFocus.) I saw senior citizens and teenagers get arrested. I saw about 20 or 30 police officers tackle people and prod them roughly with police batons. …

Between when the Occupy Wall Street protests began on Sept. 17 and this weekend’s wave of media coverage stemming from the arrests, the protesters have complained about being largely ignored by traditional media, including the major national and even metropolitan newspapers, the cable TV news channels and the local network news stations. Meanwhile, argue the protesters, similarly sized Tea Party demonstrations in recent years have received considerable coverage. The general consensus among the Occupy Wall Street protesters was that it was important to document constantly what is happening, and to present their own story when other media hasn’t. …

But as we all sat in a jail, I noticed an interesting thing happen.  People began to talk very seriously about organizing in a more cohesive way than they have been. Jailhouse rookies, who had never been arrested or involved in radical political activities, listened attentively as experienced activists spoke about the need to set clear demands in order to rally broader public support for specific outcomes.

I don’t know what’s going to happen to Occupy Wall Street as a movement. Maybe it will fizzle out, maybe it will grow. I do know that whatever happens will be documented. And I know that there’s a history of activist movements being bolstered when leaders and followers alike are jailed together.

On the matter of media coverage, Yahoo was forced to apologise after blocking emails that linked to the OccupyWallSt.org website (an error according to Yahoo), and Phoebe Fletcher on TUMEKE! takes The Herald to task on its appalling coverage. Though we’re getting plenty on Dan Carter’s groin strain, so I guess it’s all good. 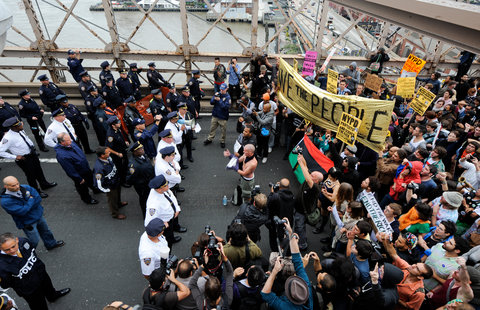