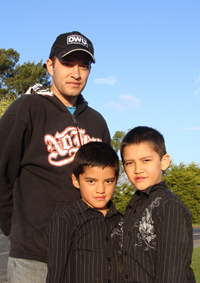 The Talleys-owned Open Country Cheese dispute took a new turn today after it was revealed that a senior manager, not content with just bullying workers, has assaulted one of them.

Here’s what Giovanni Moana, the worker concerned, had to say:

“I was told to put my head through a window in the packing room at the factory. My manager slammed the sliding window on my head and put quite a bit of weight on to it. He then said next time he would throw tomatoes at me.’

Naturally, this was pretty upsetting for him.

‘I’ve got a large family to feed and eventually I’ve got to get back to work. I was enjoying my time at Open Country. I had big plans for my family to have a better life, and for something to happen to me like this, it’s just shattering,’ he said to Radio NZ.

The Talleys cheese firm are trying everything they can to bully the workers. They set up a fake employment agency to bypass the union and casualise the workforce, tried (and failed) to block workers from accessing representation on-site from their union (earning them a $1,000 fine from the Employment Relations Authority on August 11 for breaching s.25 of the ERA), responded to strike notice with a 6 week lockout threat, and then this week have come up with fanciful stories about environmental sabotage. And right now, the workers are currently being unlawfully locked out.

It’s a pretty simple issue really, that everyone but Talleys seems to get these workers have a right to join a union, and they have a right to negotiate with their boss collectively as a team, rather than one on one. They want some basic protection around their security of hours and working conditions.

But it’s not up to them. It’s the workers who get to choose whether they go it alone or in a union and it’s their choice about who represents them.

Waikato Times reports the parties are now in mediation. The sooner that Open Country and their owners Talleys realise that workers have a right to join a union and negotiate collectively the better. But it’s not looking hopeful.

* The author is inolved in the current dispute at Open Country Cheese.