The international TPP negotiations this week in Auckland are not getting sufficient front page attention in our news media.  Away from the front pages of the MSM, there is information about opposition to the negotiations. Aside from the secrecy, it is looking far too complex and all-ecompassing. There are some protest events coming up in the next few days.

In previous posts I presented some of the arguments against TPP,  as well as some of the planned protest activities.

Earlier this week, Jane Kelsey complained about the increased secrecy and restrictions that have been introduced for the Auckland TPP round, with unprecedented limits on access to the negotiators by stakeholders.  She got some support from Russel Norman.

Not unexpectedly, John Key is backing the secrecy, and takes the opportuntiy to take a swipe at anti-TPP protesters who he says the public should ignore because they are isolationist.

Gordon Campbell responded to a Tim Groser interview  that was reported in Inside US Trade.  In a complete reversal of the secrecy of the TPP negotiations, Groser seems to be negotiating with US entities in public.  Groser is reported to have said that the NZ government might be flexible on pharmaceutical pricing, and about protections around quality assurance of dairy products.

“I am confident we can find ways that advance U.S. interests [on these two issues] without causing projectile political vomiting in New Zealand, and many of the other countries of the TPP,” Groser said.  …

Yep, that seems like a sound negotiating tactic. Give away Pharmac, one of your key bargaining chips – publicly – just as the next round of the negotiations begin.

The whole article is well worth a read, adding depth to the signs of a Key government sell-out. 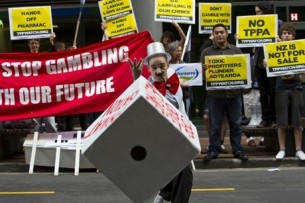 Meanwhile the protest activity planned for Wellington on Tuesday, seems to have gone well.

The bout, between a scrawny Kiwi battler and an obnoxious Uncle Sam, took place at noon at Midland Park to an audience of about 50 spectators and organisers.

Playing Uncle Sam was Wellington man Shane Hayes, who told spectators that the Prime Minister was his and everyone should do as he said. Mr Hayes was pitted against another Wellingtonian, Geoffrey Robert Burns, who was dressed as Fred Dagg to represent a typical New Zealander and  blindfolded to symbolise the secret negotiations.

Despite coming close to defeat several times, Mr Burns took out Uncle Sam for the win in the third round.

The CTU website has a section on the TPP, showing the wide range of areas that the CTU are worried about.  This includes: less control of private education providers; more difficulty in restricting high risk new financial products, borrowing and investments. These are some of the areas of concern on the CTU linked powerpoint slideshows:

In other articles: It seems the TPP is not going down that well elsewhere in the Asia-Pacific region, with a survey showing nearly two thirds of the prospective Japanese electoral candidates being opposed to Japan signing up to it.  There are concerns within other parts of the Asean area about the possible conflicts between the US-dominated TPP with it’s wide reaching agenda, and the Asean rcEP which is more trade-focused. However, many also worry about being left out of such a big grouping.

Medecins Sans Frontieres, Green Peace, and Oxfam are opposed to some aspects of TPP, including the secrecy. And there’s a warning that TPP could put an end to tax-payer subsidies for films like The Hobbit.  Creative Freedom focuses on copyright issues called for the TPP text to be released.  The Pirate Party, (satirically) oppose all plagiarised use of “Pirate” images and terms by the TPP, as well as anyone other than political parties falsely claiming to be able to provide more jobs. Techdirt points out the hypocrisy of the US calls for openness on processes to do with internet governance, while protecting the secrecy of TPP negotiations. 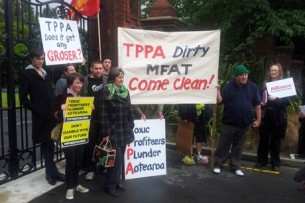 Actions – in the next few days in NZ (mostly Auckland):

Fri 7 December Auckland 6.00pm . [Related, but not  a TTPA event:]… Aotearoa Is Not For Sale: The Big Push. March against Asset Sales, meeting 6pm at Britomart. …