Our polytechnics are under threat

Many New Zealanders will remember fondly, as I do, their time training at a polytechnic. Remember fondly the hands-on practical knowledge, the great teachers, and the good infrastructure which supported the learning that helped us to get jobs.

This fine tradition of public tertiary education provision is being undermined by an ideological experiment aimed at driving down wages and conditions for the staff so crucial in any education institution.

This year the government departed with a tradition of working closely with polytechnics to establish how best to spend taxpayers’ money and instead made our public institutions compete for taxpayers’ dollars to provide foundation courses.

This unprecedented experiment involved putting $40 million of the $115 million set aside for foundation courses – such as literacy and numeracy classes; or pre-trades courses – into a competitive funding pool, then making polytechnics, wānanga, and private companies bid for funds.

From all of the information that is publicly available, institutions won money if they were the most competitive in terms of price, though all successful competitors had to meet minimum quality requirements – a true market approach to pricing. So, why is this problematic?

This experiment in competitive funding has stripped roughly $30 million from our polytechnics. And polytechnics now have no option but to cut courses for around 2000 students (and growing).

The minister will argue these 2000 students will be able to study at the wānanga or a private training establishment instead of a polytechnic. But, from the information available publicly, there seems to be no direct correlation between the courses being cut and the ones private companies will offer (either in terms of subject matter or where the courses are being offered). This means some students won’t get to study where and when they want.

Added to this, the savage cuts, at last count, have cost around 100 polytechnic staff their jobs. That’s 100 qualified and passionate teachers who won’t be there for next year’s student intake.

We know tough economic times sometimes necessitate belt tightening, but decades of good work in establishing public facilities, sound courses, expert teachers, and quality teaching methods at polytechnics are being undermined by the short-term drive to get more for less.

Staff at polytechnics want the government to spend taxpayer money wisely, but this new competitive funding model only threatens to undermine quality public tertiary education – a cost too high to bear.

TEU members have been protesting about the government’s disregard for our students, our polytechnics, and our communities. We have been protesting because we want decent jobs that’s for sure. But more than this we are protesting to defend crucial public institutions that have served New Zealand so well for decades and will go on being great places of learning if supported by government and taxpayer funding.

The question is who else will stand up and defend our polytechnics, our students, and our communities? Hopefully every person who had a great time learning at a polytechnic and realises we should ensure the next generation and the one after enjoy the same privilege and learning experiences we had.

Hopefully, the leaders of the sector. Over the last few weeks a few of the leaders of our polytechnics have started speaking out against the government’s policies, despite the fear of what this outspokenness might mean for their institution’s funding.

And we can only hope that a politician who was put into power by the people of New Zealand will have some regard for the learning needs of future generations. 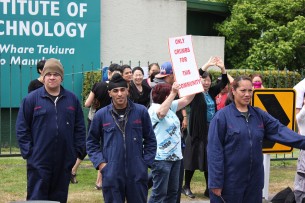 And please don’t let this minister fool you. This debate is not about quality education provision. While Minister Joyce is correct when he asserts that some private companies do better in getting students to complete courses than some polytechnics; it is also true that many polytechnics do better than many private companies in terms of educational outcomes and experiences for students.

If this competitive funding model continues all this year’s winners (who are now having to invest in new premises, new curriculum and new teachers at the expense of the publicly owned and controlled premises, resources and teachers that the government has just thrown to one side) will no doubt in the future have to bid again for funding. And, if these private companies lose next time, they too get thrown to the side, while a new organisation tries to start from scratch.

Imagine if the new entrants’ class at your local school was closed but, don’t worry, it has been tendered out to a private company down the road that might or might not still be operating the year after next. We wouldn’t treat the education of our five-year-olds like that and we shouldn’t treat the education of our school leavers and adult learners who most need new opportunities like that either.

The battle here is not about quality education – this is something we strive for daily as teachers, tutors, and lecturers – it is about whether New Zealand wants to maintain a commitment to providing education across New Zealand in publicly-run, publicly-owned, and publicly-funded polytechnics. This is a commitment we think is worth making for the sake of students, their families, and employers.

20 comments on “Our polytechnics are under threat ”