Our Water Our Vote

Sunday saw another big protest against the government. An estimated 3000 people turned out in Christchurch for the “Our Water Our Vote” rally to protest National’s attacks on Canterbury’s democracy and environment. According to The Press: 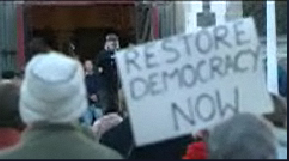 Thousands turned out for a protest against the sacking of ECan’s councillors in central Christchurch today. Politicians, Christchurch City councillors and sacked ECan councillors attended the Our Water Our Vote rally, organised to protest water issues and the removal of the council. … A cairn made of rocks from South Island rivers will remain in the Square until regional councillors are re-elected.

Robin Judkins, the Coast-to-Coast organiser, told the crowd the Government’s move was ”autocracy”. ”We’ve been hoodwinked; we’ve been hijacked. We’ve had two basic rights taken from us clean water and the ability to vote who represents us on this issue.”

Peter Beck, the Anglican Dean of Christ Church Cathedral, said he believed the demonstration was the largest the Square had seen for a ”very long time”. 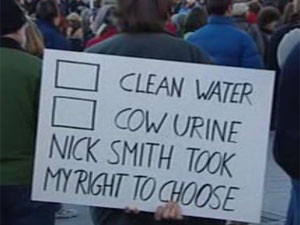 National cancelled local body elections in Canterbury because Nick Smith was “wary of the outcome”, an attack which Canterbury University law professor Philip Joseph says “is ‘constitutionally repugnant’, contains ‘elements of subterfuge’ and is a ‘constitutional affront'”. Not surprisingly, people are angry:

Today’s protest went peacefully but organisers warn the war over water has only just begun.

John Key, Nick Smith and the Nats have, in their supreme arrogance, bitten off much more than they can chew in Canterbury.