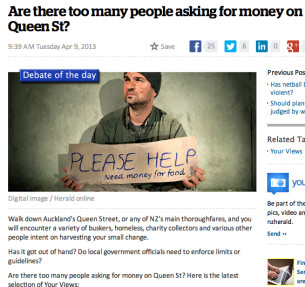 Ironically during the week of Auckland’s big sleep out there has been a proposal to change Auckland Council’s by laws to provide for the fining of beggars.  The proposal has been described as overdue by some.  But everyone seems to have overlooked the fact that begging is already banned in Auckland City.

The proposal reminds me of the the famous saying by Anatole France that “[t]he law, in its majestic equality, forbids the rich and the poor alike to sleep under bridges, to beg in the streets, and to steal bread”.  Begging is a pretty sure sign of poverty and to fine the poor for begging will only make strained personal circumstances worse.

The John Banks Auckland City Council enacted Bylaw No 20 – Public Places 2008 which included in the definition of “street trading” the “soliciting or collection of any subscription or donation”.  In John Banks’ Auckland beggars needed to apply for a licence before they could beg.  Someone found begging without a permit could be required to leave the area.  Failure to do so would constitute an offence punishable by a fine of up to $20,000.

That particular piece of madness was the brainchild of now National List MP Paul Goldsmith.   He seemed to be particularly upset that the homeless made Auckland look messy, and he proposed changes to the New Zealand Bill of Rights Act so that police officers could pick beggars up and move them on.

That Council budgeted $220,000 for security guards to deal with the homeless.  At the time it was estimated that there were 91 people sleeping rough within 3km of the Sky Tower.  This sum could have gone a considerable way to alleviating their hardship.

More recently Palmerston North City Council contemplated enacting a by law that would allow it to fine people begging on its streets.  The report on the proposal had some chilling content.  The officer preparing the report did an interesting thing and went out and talked to the beggars themselves.  Some were homeless.  Most were on benefits.  All but one had mental health problems.

The report noted that prosecutions are expensive and high handed and require considerable resources.  Why waste resources on lawyers when these resources will do a lot of good in helping the poor?  When canvassing options the report suggested that the “problem” may be capable of social resolution.  Thankfully Palmerston North Council saw sense and followed this suggestion.

In Auckland the New Beginnings Court pioneered by Judge Tony Fitzgerald has shown how effective social resolution can be.  Therapeutic intervention has seen a 60% drop in offending amongst the homeless involved in the pilot.

So I hope Auckland Council adopts a therapeutic approach to begging.  I do not believe it right that the poor and unwell should be open to significant fines for sleeping under bridges or for begging in the streets.