If there’s been a motto of this government, it’s the one above. We’ve been promised the world – tax cuts, better public services, higher wages, more growth, less regulation, lower crime, better education, lower carbon emissions – and none of it has been delivered or looks likely to be delivered at any time by this Key Government. 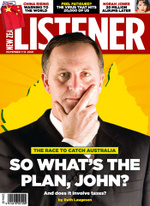 The tax cuts were cancelled once the rich had theirs. Public services are being slashed. Wages are dropping. Growth is anaemic. Nanny State has been replaced by Step-father State with new regulation and breaches of human rights. Crime is up. National standards were shoved through against the experts’ advice. The Parliamentary Commissioner for the Environment was asked whether National’s ETS would reduce carbon emissions said simply “No”.

Key was asked on Morning Report how he intended to follow through on his promise to catch up to Australia by 2025, what movement we should expect in the next year. Of course, there was no detail and no immediate target. The fact is to close the gap within 15 years, we need to close the 30% gap by 2% per year. It’s not going to happen, and it’s certainly not going to happen at some unspecified point in the future. It would need a dramatic change in our growth trajectory and there’s simply no way that’s going to happen. The best Key could claim was his government would spend more on infrastructure to boost growth and what’s the bulk of that? The ‘ultra-fast’ (whoops, it’s ‘fast’ now) broadband network, which a new study shows won’t do anything to increase growth.

People are starting to ask Key a very sensible question – where’s the plan? As hard as he tries to avoid it, he has the responsibility. He hasn’t delivered change because he is too weak to direct his government’s agenda and more concerned with being the Clown-in-Chief than actually working on the hard issues.

He hasn’t, by his minister’s own assessment “done anything” except start a cycleway, which has become to exemplify Key’s over-promise, under-deliver style. We were promised a national cycleway and 4,000 jobs to help us through the recession. What we’ve got is two jobs and a plan to help build some small, unconnected cycleways that were already planned.