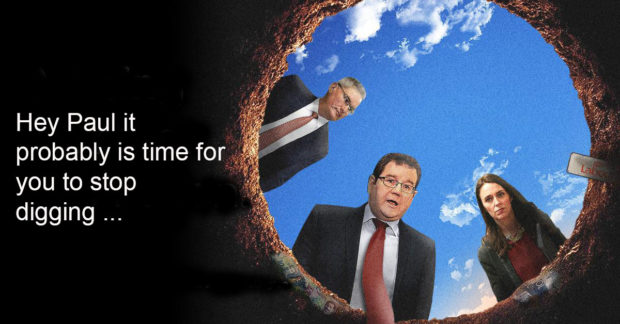 Clearly Paul Goldsmith and National have been hurt by the rank amateurishness of its alternative budget.

To recap it was released in a hurry two days after PREFU was released.  And boy did it show signs of being hurried.

It quickly transpired there was a $4 billion dollar hole because Goldsmith had used the incorrect figure for “savings” to be made by stopping contributions to the Cullen fund.

Then another hole appeared, this a more modest $88 million hole.  Although more modest in relative terms this was still sufficient to pay the annual wages of over a thousand teachers.  This mistake arose because it used the wrong figure for the capital allowance.

It got worse.  It then emerged that National had double counted a $3.9 billion contribution from the National Land Transport Fund.  Its solution was to just say that the NLTF would have to pay this sum twice.  What fiscal geniuses National has.  Imagine being able to get funding this way by drawing twice on a fund in the future even though you have no idea if it will be able to afford this.

And then another $2 billion hole appeared because National, fiscal geniuses that they are, thought they could cut contributions from the Cullen Fund but still collect the tax earned by these further investments that were not made.  Wow.  Tax income out of nothing.  And they talk to the left about magical money trees.

Yesterday Paul Goldsmith thought that he was on a winner and that he could get his own back.  He firmly believed that he had discovered two holes in Labour’s fiscal policy.

He noted that Labour had not included the cost of Auckland light rail or the proposed Otago hydro storage into its costings therefore there were holes in Labour’s budget just as bad as those in National’s.  The only problem is that he appears to have again totally misunderstood how Government finances work and shown yet again why he should not be trusted with the Government cheque book.

His basic problem is that funding for light rail has not been decided on.  There is no need to apply funds to the project until there is some certainty that it will be funded in a certain way.  At this stage there is still the possibility that the Super fund will finance and build the project as a PPP.  It may not happen this way but until there is some certainty there is no need to put it in the budget.

And besides there is $1.8 billion in the Auckland Transport Alignment Project “that will be used to leverage funding and financing and progress the city-airport and northwest corridors over the next decade.”

National’s claim is a joke.  Especially if you recall that its version of ATAP had a $5.9 billion fiscal hole in it.

Similar comments apply to the Otago hydro storage project.  There is funding in the budget for the business case.  After this has been presented a firm decision can be made about whether to proceed with it and at what cost.

And Labour’s fiscal statement clearly points out that there is unallocated capital budget, $7.8 billion worth in the next term, that will be available for different projects once decisions have been made.  To quote from Labour’s fiscal plan:

At PREFU, there was $4.8bn of funding remaining in the multi-year capital allowance. A further $3bn of new capital investment is set aside for the 2024/25 financial year within PREFU. Labour will ensure that this $7.8bn of new capital investment in the next term is spent wisely on projects that tackle our long-term challenges. We will also make sure that the investments that we have made to date are delivered.

This is not a hole in Labour’s figures.  It is a further hole in Goldsmith’s credibility.  The take is that bad David Farrar has not posted about it.

He really does need to stop digging.