For about a year now, Paula Bennett has been almost continuously proclaiming victory over unemployment.

First, it was the fact that unemployment only rose gradually at the start of the recession (due to the self-reinforcing effect of low unemployment and companies having plenty of over-time to cut).

Then, when unemployment leaped 1% in just 3 months it was ‘well, our unemployment rate is lower than Aussie’s, so we must be handling the recession better, dumb Aussie and their stimulus plan’.

When Australian unemployment peaked and then started falling to the point where their rate now a full 2% below ours (the first time in a decade theirs has been lower) they started comparing us to the OECD average instead and proclaiming the success of ‘job ops’ which everyone knows is just a rort for employers.

Then unemployment benefit numbers jumped an unprecedented 13.2% in a month.

I thought Bennett had finally learned about things like seasonal variation when she didn’t try to cover herself in glory over the normal Feb-March drop in unemployment numbers. But I was being too optimistic.

Now, Bennett is trying to claim victory because the number of job vacancy ads is rising. The Department of Labour produces a monthly index of the number of job ads. It started at 100 in May 2007, it fell to 55 in June last year and now stands at 67.

Bennett is all excited because 67 is more than 55. But is it the good news she seems to think?

Obviously, for unemployment to be stable there have to be a certain number of vacancies in every month for people joining the workforce, others whose previous jobs have been lost in the normal churn of businesses, and still more for the normal churn of employees. More than that number of vacancies and unemployment will fall, fewer and it will rise. 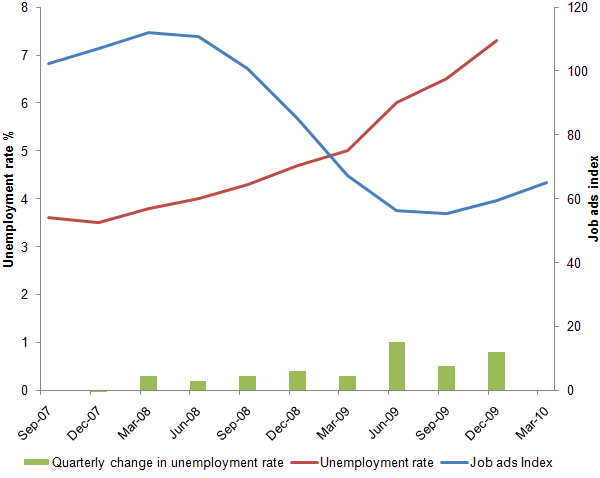 The bad news is it looks like we are still, a year after the official end of the recession, not at the point where the economy is creating enough jobs to keep unemployment in check, let alone bring it down.

It seems you need a job ads index reading of about 100 for unemployment to be steady. Once it dips below 80, unemployment takes off.

The last quarter that the index stood near where it is now in the late 60s was the March 09 quarter when unemployment rose 0.3%. So, it looks likely that a rise to 7.5% in the next unemployment rate update isn’t out of the question.

I’m very surprised and disappointed. I thought we would be heading back down by now. We may not be losing jobs as fast as we were but, incredibly, this indicator suggests that unemployment is going to keep rising for some months yet.

How far away we seem now from the four years of sub-4% unemployment that we enjoyed under Labour, a government that, unlike National, actually cared about helping Kiwis get work.