The Government yesterday released the Loopy Rules Report. I had a bit of a read of it and it looks like a state subsidised bitch session rather than a serious attempt to analyse and propose reforms for central and local government processes.  The report is mostly a collection of anecdotal complaints although some attempt has been made to determine if the loopy rules actually exist.

The headline proposal that has come from the release of the report is to allow builders to self certify aspects of their work.  Whoever can with a straight face propose this after the devastation caused by deregulation which allowed for the use of untreated timber and the leaky home fiasco needs to have their cognitive functions tested urgently.

Helen Kelly has mentioned on twitter some interesting aspects to the Government’s propaganda and some of the findings of the taskforce which suggests that Paula Bennett may have been, ahem, misguided when she talked about the need for the review.

Helen was clearly incensed when Bennett attacked health and safety legislation because of some bizarre rules:

The context and timing is interesting. The rules reduction work was occurring at the same time that the Health and Safety legislation was stalled.

This is an email Helen received from Bennett’s office in response to her request: 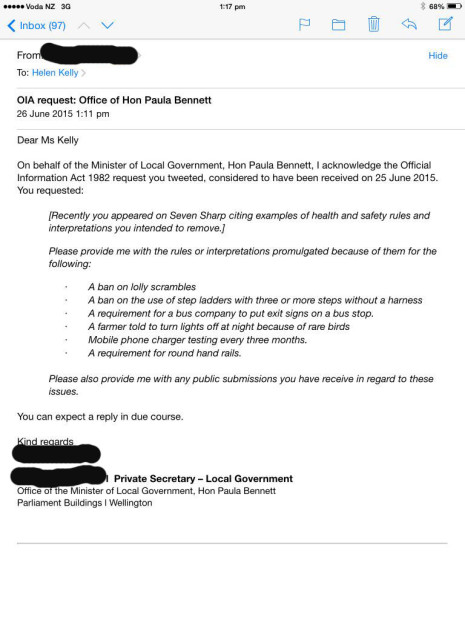 It appears that a response has not been received.

Myth: Lolly scrambles are banned because they’re unsafe for kids.

Reality: Not true. There are no Government health and safety rules against lolly scrambles at things like Santa Parades. There has been some concern that children could be injured running in front of floats, and while this is a valid concern, the most important thing is for event organisers, parents and caregivers to use common sense to keep kids safe.

Myth: It’s illegal to use step-ladders and saw horses

Reality: There are no Government rules banning their use. There are also no rules requiring harnesses or scaffolding to complete work at small heights. What is absolutely important is that people are careful when they use step-ladders or saw horses.However, The Health and Safety in Employment Act 1992 requires that they be used in the way the manufacturer intended them and that employers take steps to eliminate the risk of a person falling and injuring themselves.

Who knows how inaccurate the other examples gave by Bennett are. But certainly the first two in her list are loopy misrepresentations of the reality.

The report has this to say about the myths:

It was a surprise to us to find out that a number of the loopy rules are in fact just myths. They are misinterpretations and misunderstandings that have been repeated so often that they have taken on the status of facts. We heard many examples where people are not clear about what they need to do and why. Myths fill the gap when clear information is hard to find.

The whole campaign appears to be a waste of taxpayer’s money with the goal of undermining the very serious issue of workplace safety at a time that the Health and Safety bill was under political attack by the right.  And there should be a special place in hell for politicians who make loopy claims about non existent rules.