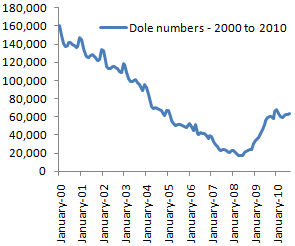 It’s been nearly two years now of Paula Bennett declaring that the unemployment crisis is over. Yesterday, she put out a press release titled ‘More than 6,000 beneficiaries find jobs in August‘. Wow, 6,000 in a month, pretty good. But Bennett must have been hoping we wouldn’t read beyond the title. The fact is that 900 more people went on the dole than came off it. The total number of beneficiaries just keeps climbing.

Bennett, of course, has excuses. The climb in dole numbers, she claims is just seasonal.

I’m afraid it’s not. Over the previous ten years (including the disastrous 2009 Bennett oversaw), the number of the people on the dole fell an average of 0.7% from July to August. This year it rose 1.3%. 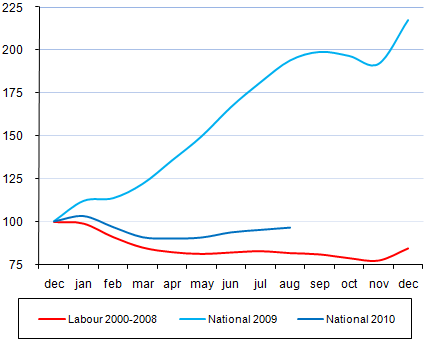 As you can see, there’s a seasonal variation alright but, while it’s not as bad as the skyrocketing numbers last year, things are not following the downward pattern they did under Labour, which they will need to do if the situation is to get better.

To look at how things are going this year compared to the ‘normal’ seasonal variance, I took out the overall downward trend from the 2000-09 average. 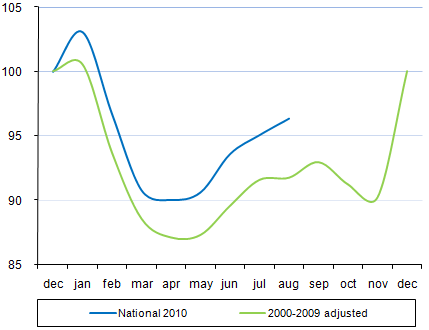 Remember: the economy started growing again over a year ago.

The fact is this government has failed to protect Kiwi jobs. They’ll bail-out their rich mates with $1.7 billion of our money but they won’t a finger when our jobs are at risk.

I’m all for Paula Bennett announcing that the employment situation is improving. I just wish that, for once, when she says unemployment numbers are falling it would be true.