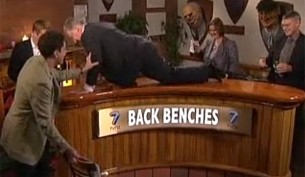 I should not have been surprised but I thought that Peter Dunne might be our saviour and stand up for the rights of ordinary kiwis to have their metadata safe.  It appears I was wrong.

The details are not out but yesterday afternoon it was announced that Peter Dunne had agreed to support the GCSB bill as long as various amendments were made.  There is to be “increased oversight” through the establishment of a two person advisory panel to assist the Inspector-General of Intelligence and Security, the need to advise the IGIS if a warrant relating to a New Zealander is put on the register, and annual reporting on the number of instances the GCSB has provided asistance and the number of warrants and authoristations issued.  This is all after the event stuff and if the Kitteridge Report is an example of what will happen the important detail will not be provided and Kiwis will not be able to find out if they have been spied on.

Negotiated changes to the law include the addition of a set of guiding principles which may or may not be helpful and removal of the Order in Council mechanism to allow other agencies to be added to the list of those able to request assistance from the GCSB.  Paula Bennett will have to get a bill passed through Parliament before unleashing the GCSB onto beneficiaries.

There will be an independent review of the operations and performance the GCSB and the NZSIS and their governing legislation in 2015, and thereafter every 5 to 7 years but you have to wonder why the reviews happen after the law changes are made and not before.

And Mr Dunne will be working with others to ensure that there is a uniform definition of private communications and metadata throughout New Zealand’s legislation.  Again this is post event stuff.  Metadata is not mentioned in the original bills and this is an astounding omission given the importance metadata plays in the debate the definition needs to be perfected before the law changes are made.

Green co leader Russell Norman has described the accommodation as a “stitch up” and the changes as “cosmetic” and he is right.

And what happened to the concerns of the Law Society, the Human Rights Commission and the Privacy Commissioner amongst others?

The HRC submission in particular makes compelling reading.  It contains the following passage:

As the legislation is overly broad and enables mass surveillance, in our view, the limitation impairs the rights to privacy and freedom of expression in particular, more than is reasonably necessary. Further in the absence of any compelling argument for the level of intrusion that is contemplated, it cannot be said that what is proposed is proportionate to the objective of the legislation

Get that Peter Dunne?  The HRC is saying that there is no compelling reason for the level of intrusion that is being contemplated.

Tech Liberty NZ in its submission stated that we are entering into a society where a lot of our metadata is going to be collected randomly.  What are the benefits?  That question has not been answered.  Surely the most rudimentary cost benefit analysis should have been performed.

The HRC sums up the effect of the bills very well.  If enacted the law will permit foreign intelligence agencies to access data about private citizens in New Zealand.  None of Dunne’s negotiated changes will change this.

John Key has said that he did not believe that the GCSB had engaged in the mass collection of metadata and he confirmed that metadata should be treated the same as communication and any collection of it would require a warrant.  He planned to make a clear statement about this in the bill’s second reading

The drafting of the law is very loose.  It is far too full of slogans and the interrelationship between the various provisions is far too complex to be understood easily.  For instance it is intended that the performance of the Bureau’s functions and the relative importance and priority of the functions are to be determined by the Director.  And “the performance of the Bureau’s functions under section 8A (information assurance and cybersecurity) and section 8C (co-operation with other entities to facilitate their functions) is at the discretion of the Director”.

To make things even worse the proposed section 8D  allows the Director “all the powers that are necessary or desirable to perform the functions of the Bureau”.  We will need an army of Kim Dotcoms with attendant resources to work out in Court what these provisions mean.

And while a warrant may be required to collect Kiwi metadata the relevant Minister can issue the warrant.  So Key’s mate will apply to Key for permission to spy on us.  Why am I not comforted by this thought?

As Idiot Savant states there is still time for Peter Dunne.  But my hopes that he would make a principled stand are fading fast.

90 comments on “GCSB law changes are a Dunne deal ”