Petty politicking and the Xinyao tragedy 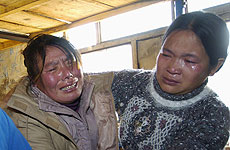 Reuters reports that the death toll from China’s Xinyao mine tragedy has now surpassed the 100 mark after 50 rescue workers were sent in without training and never resurfaced.

According to Chinese media the cause of the tragedy was the mine management’s failure to install a gas detection system and its storage of explosives in an underground storeroom. The rescue workers were sent in without any training and probably made matters worse:

“We never received any rescue training,” the newspaper quoted miner Mao Caoliang as saying. “We did not know what to do or what not to do when inside the mine. No one told us what to do when faced with an emergency. We carried oxygen masks with us but did not know how to use them. Many suffocated.”

This kind of tragedy is common in China, where the mining industry’s appalling health and safety record causes the deaths of more than 5000 miners a year.

These deaths are completely avoidable and show the real need for New Zealand to use its expertise in mine safety to help improve standards for Chinese workers and prevent the needless death and suffering we are seeing at Xinyao.

They also provide some perspective on National’s attempt just last month to score political points out of a Department of Labour funded initiative by the Council of Trade Unions designed to do exactly that.

Here was a decent, humanitarian gesture to the Chinese people that will help prevent similar tragedies and in time save hundreds if not thousands of lives, but National attacked it and threatened future funding because it suited their agenda to cast aspersions on the Government’s relationship with the unions and to stoke xenophobic outrage over New Zealand tax dollars going to the Chinese.

There are some things more important than petty politics, and in the light of Xinyao National’s cynical attack is all the more sickening.

81 comments on “Petty politicking and the Xinyao tragedy ”