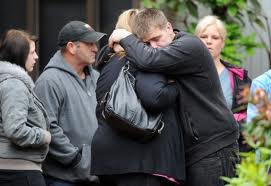 So Pike River has been punished for the deaths of 29 workers.  Judge Jane Farish has fined the company $760,000 and ordered it to pay $110,000 compensation for each worker that died and for the two survivors.

She also remarked on the obvious despair felt by the families and described the hearing where they spoke of their loss as very tough,  “[t]he victim impact statements were harrowing. They all feel deep sorrow.”

She previously said that it was morally unjust the way that Pike River Coal Ltd had been able to fold soon after the disaster and thereby avoid paying further money to the families.

The SST this morning contrasted Pike River with that of the Upper Big Branch Mine in West Virginia, where a compensation package of $46.5m was paid after an explosion that also claimed the lives of 29 men.

That sum was part of a US$209.3m package that mine owners agreed to pay to end a criminal investigation and civil proceedings. Mine manager Gary May was also jailed for 21 months after pleading guilty to conspiracy to impede America’s Mine Safety and Health Administration’s enforcement efforts at the mine.

Like Pike River, the Upper Big Branch mine was blighted with health and safety failings and poor ventilation; the latter which contributed to the subsequent deadly methane explosions.

The chances of the Pike River families being paid out do not appear to be good.  The Company has said that it only has $500,000 in cash which is available for secured creditors and $156,000 in insurance monies left to meet liabilities.

The shareholder, New Zealand Oil and Gas appears to be reluctant to contribute any further funds.  It has noted that it provided Pike River with $25m to keep keep it afloat immediately after the tragedy and put insurance proceeds to the contractors of Pike River to partially compensate for money owed to them and made a contribution to the victims’ family trust.  But its “largesse” appears to be running out.

NZOG chief executive Andrew Knight has told the SST “[w]e quite clearly don’t have a legal responsibility … we quite clearly were not in control. And there is evidence to that effect. I have my own shareholders to manage. And my shareholders are saying, ‘Well you’ve already spent $25m – you need to learn where to stop.”

I suspect that the legal advisers for the families will be having a good look at a possible claim against the directors of Pike River.  Under section 135 of the Companies Act 1993 a director must not “allow the business of the company to be carried on in a manner likely to create a substantial risk of serious loss to the company’s creditors”.  With the benefit of hindsight the way the mine was run clearly created a substantial risk of serious loss to all involved in the mine.  There is some wriggle room in what meaning ought to be given to “creditors” and if this includes the workers but this may be able to sustain a claim.

Judge Farish may have been hinting at this when she noted that the Directors had significant insurance and criticised them for not volunteering funds.  One of the directors, Stuart Nattrass, has been quoted as saying that he is thinking of making a contribution.

One thing is clear.  The Pike River families deserve every cent of compensation that has been ordered.  For NZOG and others to use legal niceties to avoid paying compensation would be totally unjust.

33 comments on “Pike River Compensation must be paid ”