Planet Key, Planet Paula, and the War on the Poor

Over the last week, the government’s off-world set of distorted realities has come to the foreground: those of “Planet John Key” and “Planet Paula”. This is a reversal of National’s spin lines of attack against (so-called) “Planet Labour”, most noticeably in Question Time in Parliament. They use this term to paint Labour as being out of touch with reality, especially in relation to the government’s idea of economic and financial realities. This has been an attempt to deflect the opposition’s criticisms of the government’s lack of policies to deal with New Zealand’s increasing problems lack of jobs paying a living wage, and with extensive and destructive wealth and income inequalities.

In contrast, the focus on Planet John Key and Planet Paula Bennett refocus the debate on the real problems NZ faces: these Planets are inter-related worlds designed to increase divisions and inequalities, and undermine democracy;. They are worlds based in myth and distortion, and that re-cast Dickensian separations of the “deserving” and “undeserving” poor . Here Bennett’s latest welfare reforms are spun as much needed and thoroughly “modern” ones. However, apart from anything else, what they really do is recast the social contract in such a way as to undermine previous attempts to make it fair and democratic, by waging a war on the poor.

Bennett has attempted to spin her reforms as “modern” and necessary to deal with current realities. For instance, back in June, she introduced the second reading of Social Security (Youth Support and Work Focus) Amendment Bill in these terms:

This Government is transforming the welfare system into one that is modern, active, and responsible, because currently it is passive, out of date, and, quite frankly, it is failing too many.

In Bennett’s focus on “responsibility” and “social obligations”, pre-existing conceptions of social contract are reworked, so that the roles of state and individual become less equal. The original idea of a social contract is between the state and the individual. The individual gives up some rights so that they can get some protection by the state, against lawless and destructive behaviour by others. The result of the Bennett-type of shift is that the greatest weight of social responsibilities are heaped on the poor, while the powerful elites, those on Planet Key, have a greater share of “rights” and privileges.

This is not that thoroughly modern and Kiwi, but something that can be seen in the policies and rhetoric of Britain’s New Labour in the late 1990s, and that was picked up by the current British coalition government. Ruth Lister outlines the reconstruction of the “welfare contract” in the UK, in “The Age of Responsibility: social policy and citizenship in the early 21st century”, pp63-80, in “Social Policy Review 23: Analysis and Debate in Social Policy, 2011” (extracts available on google books). 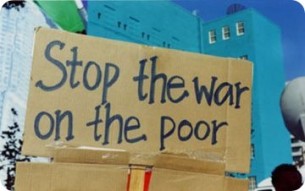 Lister shows how the shift to a focus on “social obligations” is one-sided, and rather than a mutually beneficial contract between the individual and the state, the balance of power is tipped towards state dominance and control. Furthermore, some of the responsibilities of the state are contracted out to private entities, creating less accountability. This can be seen in Part One of Bennett’s Social Security (Benefit Categories and Work Focus) Amendment Bill, where beneficiaries are obligated to “work with contracted service providers”.

The welfare is no longer a protection against loss of employment/income, but becomes an obligation on citizens to work. At a time when it’s becoming increasingly hard to find jobs, these “obligations’ are all focused on the poor, the requirement to work, and regulation and control of their behaviour. It is creating fear and hardship amongst those with least power to resist.

Good on the Auckland Action against Poverty group for their well-timed and well-focused protest yesterday.

As Sue Bradford said at the protest:

“Just in the last 24 hours I have heard so many stories from beneficiaries who are just overwhelmed by the next onslaught.
The fear is huge of what is going to happen.

Contrast this with Planet Key, where it’s all about irresponsible and unaccountable fun, golf and holidays.

67 comments on “Planet Key, Planet Paula, and the War on the Poor ”