In the 1980s and early 1990s, during the Right’s neoliberal economic revolution, New Zealand’s economic output per person stalled – growing just 0.01% per year between 1984 and 1992 – and fell behind Australia’s economy, which grew 1.84% per person a year over the same period. Between 1999 and 2008, the New Zealand’s GDP per capita actually grew faster than Australia’s (2.00% vs 1.87%) but when we’re so far behind the gap continues getting bigger even if we grow a little faster. 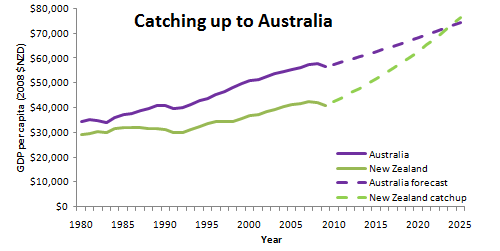 So, what will it take to catch up Australia by 2025 like Key is promising?

Let’s assume Australia keeps growing at 1.74% per person on average like it has the last 30 years. To close the gap, New Zealand would have to grow at 4%.

That’s more than three times the average we’ve managed since 1980. It’s more than twice what Australia managed. Barring total disaster for the Aussies that somehow bypasses us or the discovery of the world’s largest reserves of pixie dust in the Bay of Plenty, it’s not going to happen.

Don Brash and the other right-wing cronies on the 2025 taskforce can do the maths. They and the Government must know their stated goal of catching up to Australia isn’t realistic. In reality, the goal’s just an excuse that can be given for implementing the same old failed rights wing policies, a cover for tax cuts for the rich, cuts to social services, lower wages, and worse working conditions.

The Right’s agenda has never been about growing the economy faster (if it has been, it has been a spectacular failure). It’s about getting a bigger slice of the economy for the wealthy at the expense of everyone else. So are they really trying to play catch up with Australia now, or is there another game afoot?