A UMR poll shows that 40% of Kiwis support paying an earthquake levy to help pay for the Christchurch rebuild. 22% prefer more borrowing, and 29% want spending cuts. Asked just whether they supported or opposed a levy – 57% supported it. Yet the Nats are choosing cuts instead.

I have shown before how we could avoid any spending cuts to important stuff simply by reversing the tax cuts for the wealthiest New Zealanders, reversing the brand new corporate rate cut, getting rid of polluter subsidies under the ETS, and not building motorways whose costs exceed their benefits.

The Greens’ proposal is focused solely on raising money to pay for the Christchurch rebuild. They say that a 1.5% levy on income over $48,000, a 3% levy on income over $70,000, and returning the corporate rate to 30% would raise $1 billion (which looks about right according to Treasury’s guide).

John Key, however, is determined not to listen to the people. He is going to push ahead with spending cuts instead, claiming that raising a levy will hurt the economy.

In reality, it is deep cuts to public services and transfer payments (Working for Families, etc) that will hurt the economy. 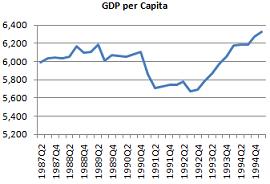 Except for the younger amongst you, we all remember the never-ending recession of the early 1990s. Just as things seemed to be looking up, Ruthanasia came along in 1990 and the guts were kicked out of local communities and economies, sentencing the country to more years of recession. It wasn’t until 1994 that economic output per person regained the level enjoyed in the late 80s.

Russel Norman warns that National will extend this never-ending recession if it repeats the folly of the 1990s:

“This is the 1991 lesson which National should have learned.

“New Zealanders clearly want to do the right thing and we know a temporary levy is smart economics, so the Government’s refusal to consider it looks more and more foolish,”

Norman is hopeful that Key will be swayed:

“John Key has shown in the past he’s willing to listen to New Zealand. Hopefully this poll, on top of the advice of several economic commentators, will shift his thinking.”

I wish I could share that optimism. Key and English are not choosing to cut public services because they aren’t aware of or don’t understand the alternatives. They’re doing it because they want to, because they choose to. This is their ideology in action.