Frogblog has another example of the continuing politicisation of the public service under National. I meant to post on this a while back, but you may have seen these ads in your local paper recently: 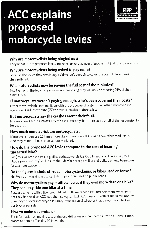 Not only is the ACC’s message in this ad contrary to the Woodhouse principles it was founded on, but there’s barely two sentences in the whole thing about how the public can have its say. The rest of it, as Frog points out,

continues a disturbing trend under the National-led Government of using public service funding in this case your and my ACC levies to promote Government political spin.

It should come as no surprise that ACC is doing the Government’s dirty work on this issue. You’ll remember Nick Smith turfed out Ross Wilson because he knew Wilson was too committed to the principles of ACC and the people it’s supposed to protect to play along with National’s manufactured crisis.

That’s why Smith personally chose Business Rountable member John Judge as chair, and it’s why the ACC is every day looking more and more like an arm of the National Party’s media unit.

4 comments on “Politicisation of ACC continues ”