Last week, new information became public about potential stat-juking by our Police. The practice of reclassifying hundreds of “burglaries”, which appear in the crime statistics, as “incidents”, which do not, has the effect of artificially reducing the apparent crime rate. This practice occurred mainly in the Counties-Manukau police district, which operates in the electorate of then-Police Minister Judith Collins. That is, of course, troubling on a number of levels.

Further, we learn that the Minister has been aware of this issue since 2011, and told no-one and did nothing. She even retains on her website a National Party local newsletter from that time hailing the big reduction in crime in the area:

Crime down in Counties-Manukau South

Increased pressure on criminals and a greater focus on crime prevention has shown the fight against crime can be won with a well-supported and well resourced Police service.

The 2011 Crime Statistics released this week indicate reported crime is down 15 percent in the Counties-Manukau South District, which includes Papakura and Pukekohe, during the fiscal year ended 30 June 2011.

Theft, fraud and harassment offences were all down and the number of burglaries in our area has dropped 36.7 percent.

A Minister of the Crown has a duty to the public to ensure that information about crime in their area is accurate. Even more so when that information comes form the Minister’s own patch. Collins’ failure to investigate is yet another strike against her political judgment.

And today, her bullying instinct came to the fore again as she cried victim, saying the leak of the information was politically motivated and pointing the figure at Labour’s Jacinda Ardern. Collins claimed to be “disgusted” at Ardern’s behaviour. Two points here:

Updated: Rob Salmond has a new post on the same topic. It starts with:-

This morning Judith Collins said categorically that there was no political pressure being placed on Police in terms of reported crime numbers. That is not true. Here is an info graphic from National’s website showing the reduction-in-reported-crime target the government has put over the police. 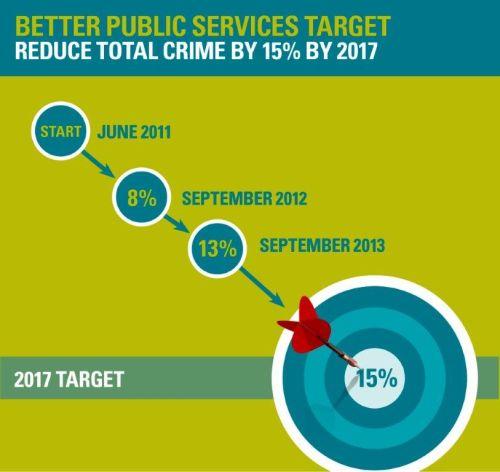