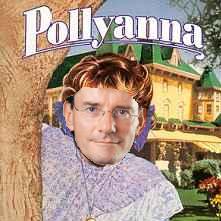 The other day, Chris Finlayson described himself as a Pollyanna – it’s an American term (of derision) for someone who sees everything as positive, ignoring unhappy realities.

I couldn’t help but think of that listening to Morning Report’s coverage this morning of the last Foreshore and Seabed hui.

Finlayson was all bouncy and optimistic, selling his ‘no-one owns it’ ‘solution’ to the F&S issue. Then, there was audio of various Maori speakers. Not a single one agreed with his offer or anything like it.

The Maori position is clear. Maori did not give away the foreshore and seabed in the Treaty. Their customary law ownership was not superseded by the imposition of Crown law, indeed the Treaty specifically recognises that iwi’s ownership of their property remains intact. The Crown recognises that the foreshore and seabed can be owned, and there are lots of private titles. So, Maori should have their title recognised. They should have to go through courts or have some silly ‘no one owns it’ comprise. It’s their land, they never sold it or gave it up, so it remains theirs (and they should be able, as owners, to exploit its aquaculture and mineral potential).

Finlayson simply doesn’t seem to understand the gulf that lies between that position and his, which is in essence the current law with a new kind of title that doesn’t differ significantly from Crown ownership in the current law.

But maybe he doesn’t need to. All he needs is the votes of the Maori Party. And it’s pretty clear they’re going to sell out.

Tariana Turia has her Whanau Ora ministerial portfolio – even thought it has no budget, no plan, no ministry, and no credibility. Pita Sharples has his DRIP – which the Government has made clear it considers a meaningless document. That’s enough to buy their support for a meaningless ‘symbolic’ change to the F&S legislation.

And it’s not Finlayson who stands to lose in a backlash from Maori voters who expected real change, it’ll be the Maori Party.

Hmm, maybe Finlayson has good reason to play the Pollyanna after all.