In recent posts in this series we’ve focused on the Children’s Social Health Monitor 2012 Update Report, see the the full report (pdf) here.  Today we’ll carry on with a look at the remaining Economic Indicators.

Firstly, research suggests that children in families where the parents are unemployed have higher rates of psychosomatic symptoms, chronic illnesses and low wellbeing and that, while the magnitude of these associations is reduced once other potentially mediating factors are taken into account (e.g. parents’ former occupation, sole parent status, and migrant status), the associations do not disappear completely [29]. Further, research suggests that these negative effects may be mediated via the impact unemployment has on parents’ mental health, with the mental distress associated with decreased social status, disruption of roles, loss of self-esteem and increased financial strain, all impacting negatively on parents’ emotional state [29]. This in turn may lead to non-supportive marital interactions, compromised parenting, and children’s internalising (e.g. withdrawal, anxiety, depression) and externalising (e.g. aggressive or delinquent behaviour, substance abuse) behaviour [7].

Secondly, for young people the research suggests that unemployment leads to a range of negative psychological outcomes including depression, anxiety and low self-esteem, which are in turn associated with adverse outcomes such as heavy tobacco, alcohol and drug use; and higher mortality from suicide and accidents [30]. …

Unemployment is a rot that eats away at our whole society. Most people want and need to work, but too often the work isn’t there. 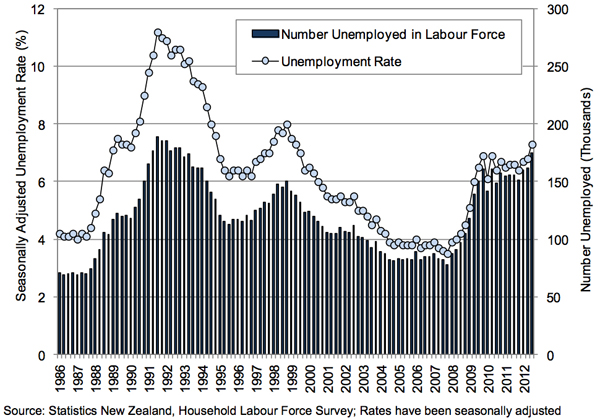 No surprises here either.

In New Zealand, children who are reliant on benefit recipients are a particularly vulnerable group, with the 2008 Living Standards [26] survey finding that 59% of children whose main source of family income was a benefit, scored four or more on a composite Deprivation Index. This Deprivation Index measured the extent to which families were economising on a range of items including being able to keep the main rooms of the house warm in winter, and having a meal with meat/chicken/fish at least every second day. Families scoring four or more on this Index were much more likely to report living in houses that were damp or mouldy, or in very poor physical condition; that their children were having to continue to wear worn out shoes or clothing; that they were cutting back on meat and fresh fruit and vegetables; and that they were postponing doctors visits because of cost, all factors which are likely to impact adversely on children’s health and wellbeing.

Using a different measure, in 2009 Perry noted that 75% of all households (including those with and without children) relying on income-tested benefits as their main source of income were living below the poverty line (housing adjusted equivalised disposable income <60% of 2007 median) [26].This proportion has increased over the past two decades, rising from 39% of benefit-dependent households in 1990, to a peak of 76% in 1994, and then remaining in the low–mid 70%s ever since [26], with these trends being attributed to three main factors: cuts in the level in income support during 1991, growth in unemployment (which peaked at 11% in 1991) and escalating housing costs, particularly for those in rental accommodation [14]. … 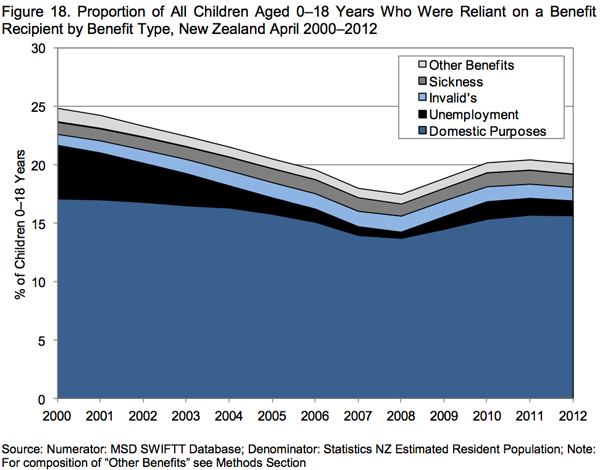 It is (long long past) time to raise the the DPB.

That’s it for the economic indicators, next week a look at Health and Wellbeing Indicators.

In current news, as already covered here by Karol, the Nat government got a “D” on Child Poverty from the latest Salvation Army report (full report here). I’m sure they’ll add it to the huge pile of similar reports that they are ignoring. As I/S and No Right Turn reminds us, far from acting on these reports, the Nats are keen on burying the evidence.