In recent posts in this series we’ve focused on the Children’s Social Health Monitor 2012 Update Report, see the the full report (pdf) here.  Today we look at the next Health and Wellbeing Indicators.

Poverty stories and statistics make grim reading, never more so than when dealing with this topic. The rate of infant deaths in New Zealand is typical by international standards. But this is an average figure, as with all of the other indicators that the report covers, Maori and Pacific families are the most affected.

Infant mortality is often used as a barometer of the social wellbeing of a country [34]. New Zealand’s infant mortality rates are middling by international standards2, being lower than those of the USA and some Eastern European countries, but higher than those of Central and Northern Europe [36]. However, mortality during the first year of life remains much higher than at any other point during childhood or adolescence, with 308 New Zealand infants dying prior to their first birthday during 2009 [37]. Further, ethnic and socioeconomic disparities, remain with infant mortality rates in 2008 (provisional data) being 6.9 per 1,000 live births for Māori babies, 5.9 for Pacific babies, and 3.8 for non- Māori non-Pacific babies [35].

In this part of the report we only have data up until 2009, so it’s not possible to examine changes arising from the financial crisis / change of government.

In New Zealand during the 1990s, neonatal and post neonatal mortality both declined, although rates were more static during the mid to late 2000s. An upswing in neonatal mortality was evident during 2007–2009. However it is too early to say whether this is a random fluctuation or the beginning of an upward trend. A breakdown of the factors associated with mortality shows a near perfect correlation with the Deprivation Index, and once again the significance of ethnicity (note the best outcomes are for Asian/Indian). (See the report for an explanation of Rate Ratio (RR) and the associated confidence interval.) 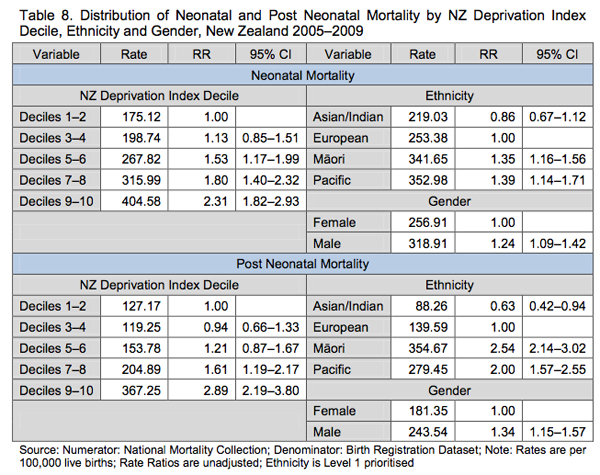 An exploration of Sudden Unexpected Death in Infancy (SUDI) shows similar patterns and trends, but note the huge incidence of this tragedy in the Maori and Pacific populations.

These figures demand a response in Maori and Pacific health – something much more systematic and effective than Whānau Ora.

We’ll look at the final section of the report next week.

In current news, right-wing governments are all the same when it comes to poverty. Here’s what the British tories are up to:

Ministers accused of downplaying income in measure of child poverty

The government’s desire to alter the official definition of child poverty risks deliberately downplaying the importance of money just as a series of government policies will reduce the incomes of poor families, a group of senior academics warn in a letter to the Guardian.

A consultation on how to measure child poverty more accurately that was launched last November, seeking input from charities and experts into “better measures of child poverty”, comes to an end on Friday. The government believes that a wider definition of what constitutes poverty will give a better picture of what it means to “grow up experiencing deep disadvantage“.

The letter, signed by some of the country’s leading academics in this field, agrees that in addition to the current measures used to count the number of children living in poverty, it would be “helpful to track what is happening to the factors that lead to poverty and the barriers to children’s life chances”.

But they warn: “It does not make sense to combine all of these into a single measure. To do so would open up the government to the accusation that it aims to dilute the importance of income in monitoring the extent of ‘poverty’ at precisely the time that many of its policies will be reducing the real incomes of poor families.”

Professor Jonathan Bradshaw, the lead consultant on the UK’s contribution to Unicef’s Child Well-Being report, said he believed that the government was “trying to move the goalposts” at a time when child poverty was increasing rapidly.

He described the consultation document as the worst paper setting down government policy direction he had ever read, questioned whether it was written by civil servants and said it read more like it had been “plagiarised from a right-wing thinktank tract”. …

Shades of our own Nats’ decision to obfuscate a crucial environmental report. When they don’t want to solve a problem, they try to hide it instead.