In recent posts in this series we’ve focused on the Children’s Social Health Monitor 2012 Update Report, see the the full report (pdf) here.  Today we look at the the final Health and Wellbeing Indicator, and a wrap-up for the report.

INJURIES ARISING FROM THE ASSAULT, NEGLECT, OR MALTREATMENT OF CHILDREN

Every one is one too many, and the effects of child abuse (as detailed in the report) are both complex, and long lasting. Here’s the summary of the data relating to incidence, with the same socioeconomic / racial distribution as usual: 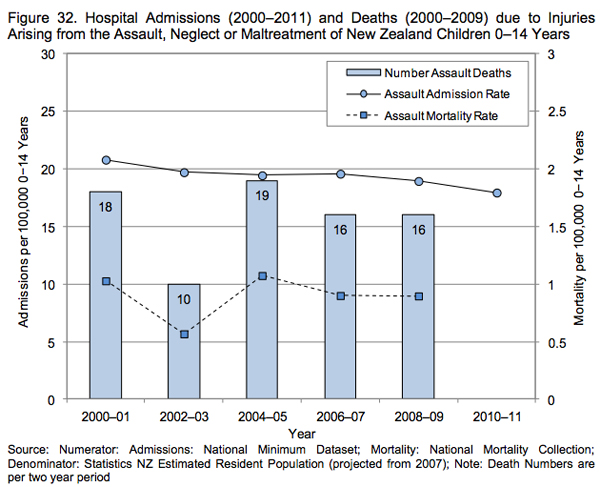 After summarising these (and related) datasets, as usual the section ends. And that’s it, boom, end of the report (apart from Appendices on the data and statistical methods). I was surprised to find that the report didn’t finish up with conclusions and recommendations. Presumably their mandate was simply to present data, not to discuss its implications.

Nonetheless I think there are obvious conclusions to be drawn (they have cropped up time and time again in the data) and thus there are recommendations to be made. So I’ll have a go at writing a brief section myself.

My suggested CONCLUSIONS AND RECOMMENDATIONS

Poverty causes many health, mental and social problems. In general there is a strong correlation with the degree of poverty – the poorer you are the worse it gets. Recommend: We should be taking serious action to eliminate poverty (there is every indication that such action would more than pay for itself in savings, for example to crime and health costs).

Families on benefits are disadvantaged, and unemployment is too high so too many families are affected. Recommend: The economy should be managed so as to create jobs instead of destroying them.

Benefits, in particular the DPB, are too low – children in these families are severely disadvantaged. Recommend: Raise the benefits.

In NZ the issue of poverty is inexorably bound to the issue of race. Maori and Pacific populations are the poorest, and therefore suffer the most from the ill effects (and the ongoing disadvantages) of poverty. Recommendation: Assistance should be targeted at the poorest. In the NZ context this means that assistance targeted to and in partnership with Maori and Pacific populations is likely to be the most effective.

The detrimental effects of poverty are both complex, and long lasting. They limit social mobility and contribute to the significant inter-generational continuity of social problems. There is no “level playing field”. Recommend: Political policy should acknowledge these factors and work to “break the cycle” of poverty.

I won’t summarise any current news this time, I’ll just point you to this excellent post at Local Bodies – “Child Poverty, No Plan!“. Go read it…