Over the next few posts in this series I’ll be looking at the Office of the Children’s Commissioner (OCCC) 2012 report “Child Poverty in New Zealand evidence for action“. It’s a substantial document, prepared by an Expert Advisory Group after an extensive process of consultation, and culminating in 78 specific recommendations. Before we start in on the facts and figures, I like the way that the report sets its tone in the foreword:

At one consultation seminar participants were asked:‘what is the one thing you think the Prime Minister should do to address child poverty?’ A woman stood up and responded vigorously: ‘come and live my life for a while’. For this woman and her children and for tens of thousands of others across the country, child poverty is both real and debilitating. It means missing out on many of the things which the majority of children take for granted: adequate and nutritious food, good shoes and clothing, a separate bed, a warm, dry house, participation in school trips and occasional holidays away from home. Material deprivation of this kind should not be tolerated, least of all in a land of relative abundance.

There is it in a nutshell really. In a land of relative abundance we have far too many people, including 270,000 children (and rising) who are living in poverty. They are poorly served by a government that has no understanding of or empathy for the poor and disadvantaged. It’s a disgrace, and it’s a ticking time-bomb that the next government will have to deal with.

The first chapter, Child Poverty in New Zealand, sets out background issues and definitions. On the first page we meet a paragraph which (in my opinion) happens to characterise exactly the facts that conservative / right-wing politicians and their supporters don’t (or won’t) understand about poverty:

Child poverty imposes costs. It harms the children directly affected and our wider society. It reduces the opportunity for children to develop their gifts and talents. It undermines their rights. It stifles educational achievement, reduces labour productivity and earnings ability, and increases the costs of health care and crime. Considerable sums of public money are spent dealing with these negative consequences of child poverty. Moreover, a failure to address child poverty now will damage the nation’s long-term prosperity.

Right from the start this makes a nonsense of National’s beneficiary-bashing penny-pinching attitude to poverty in NZ. It isn’t a level playing field out there. Spend the money to reduce poverty, and it will pay for itself many times over! (See links in the footnote to this post.)

This section notes the lack of an agreed definition of poverty in NZ. Missing the tools to describe and measure the problem, we have real difficulty (“convenient” to some) in setting and achieving goals (1984 in more ways than one). The following definition is proposed:

Children living in poverty are those who experience deprivation of the material resources and income that is required for them to develop and thrive, leaving such children unable to enjoy their rights, achieve their full potential and participate as equal members of New Zealand society.

It’s been carefully thought out, and several aspects of the definition are then explored. For example:

Our definition of child poverty also highlights the socioeconomic rights of children as citizens. These rights are enunciated in the United Nations Convention on the Rights of the Child (UNCROC), to which New Zealand is a signatory. Articles 26 and 27 of UNCROC refer to children’s rights to social security, and to a standard of living adequate for a child’s physical, mental, spiritual, moral and social development.

1.2 How many and which children are living in poverty?

This section considers two international definitions / measures of poverty, the first based on whether a household’s disposable income falls below a certain threshold (often 50% or 60% of the median for the country), the second based on the proportion of the population that cannot afford specific “essentials”. Overall trends for poverty in NZ will be familiar to those who have been reading the recent Poverty Watch posts on the CSHM report – for example: 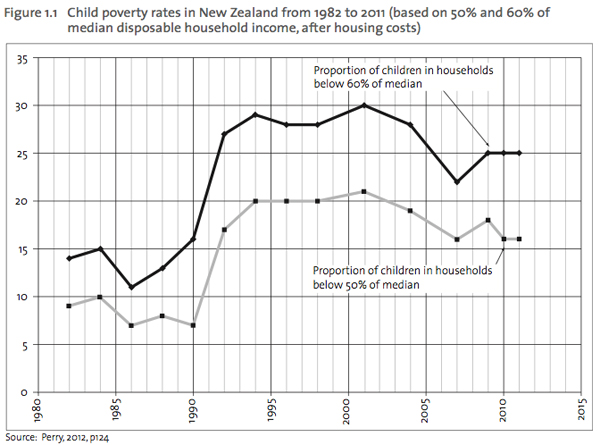 As usual we can see the massive rise following the neoliberal disaster of the 80s/90s, the gradual decline under that last Labour government, and the recent spike upwards again. The section goes on to break the data down by age, ethnicity, housing type and more. As usual:

Child poverty rates differ significantly by ethnicity in New Zealand. Poverty rates (after housing costs) for Mäori and Pasifika children are around double those of Päkehä/ European children. Further, Mäori and Pasifika children are approximately twice as likely as Päkehä/European children to be living in severe poverty and are also at a higher risk of persistent poverty (Imlach Gunasekara & Carter, 2012).

1.3 How New Zealand compares with other countries