This week the NBR published their “rich list”. Bryce Edwards wrote a typically thorough round-up of the coverage:

The rich get richer (and more powerful)

The political power and wealth of New Zealand’s business elite is on display in two important media publications this week – the NBR’s 2013 Rich List and the New Zealand Herald’s ‘Mood of the Boardroom’ survey of CEOs.

Both publications illustrate the immense power and wealth that is concentrated amongst a miniscule group of businesspeople. According to the NBR, ‘The rich continue to get richer’. Editor Nevil Gibson says ‘This year’s Rich List is bigger and richer than ever before, with the total minimum net worth of members now at $47.8 billion, an increase of $3.5 billion on last year’s list. Add the small group of New Zealand-based international billionaires and the figure climbs to $60.4 billion, an all-time record’ – see: How to be a millionaire – NBR Rich List.

This enrichment is because, Gibson says, ‘The past year has been a good one financially’, with record profitability: ‘The surge in wealth is mainly due to the substantial gains of most investment classes; the New Zealand equity market returned 25.9% last year’ …

Of course not everyone is celebrating the achievements of New Zealand’s wealthy – see my own analysis of the latest list: A View of who runs New Zealand, which also has plenty of images and cartoons about the wealthy in New Zealand. See also, Max Rashbrooke’s blogpost, The Key graph for understanding the Rich List, which draws attention to growing inequality in New Zealand and shows ‘how the NBR Rich List’s wealth has increased dramatically since the mid-1980s’.

Unionist Robert Reid has spoken out against the NBR list, saying that ‘The top one per cent owns three times as much wealth as the poorest 50 percent, and low wages are one of the biggest drivers of poverty in New Zealand’ – see Newswire’s Rich list nothing to celebrate, union says. And the NBR reports the views of Labour MP Andrew Little – who the newspaper says is ‘one of the more business-friendly Labour MPs’. According to Niko Kloeten’s article, NBR Rich List highlights inequality, claims Andrew Little, Little ‘says he does not have an issue with the Rich List celebrating those who have created wealth but the plight of the less well-off should not be forgotten’. Little points out that the median wage has gone down for two years in a row now.  For the polar opposite point of view, see Mark Hubbard’s blog response, Inequality … No, No, No – Don’t Go there.  …

Like most people I don’t have any problem with folk getting rich – good for them. What I do have a problem with is folk getting rich and refusing to give anything back to the society that made them rich. The scale of tax fraud and evasion in this country is disgusting, and totally dwarfs (in financial terms) the issue of benefit fraud: 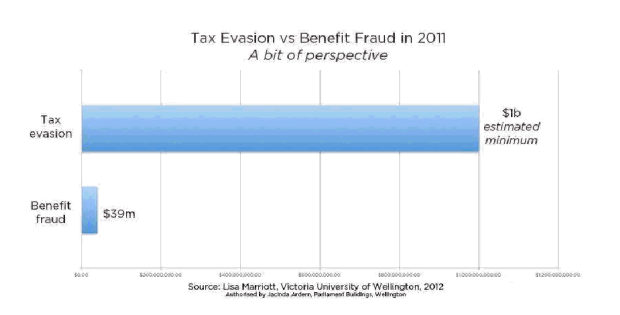 The continued enrichment of the 1% is also disgusting in the context of ongoing poverty in NZ. As well as the links in Edwards’ piece, some other relevant recent reading includes:
Child poverty ‘shows no sign of improvement’
Rich List won’t be celebrated everywhere – union
Government told there’s no excuse for child poverty
Welfare group warns thousands will suffer after changes

In short the idea of “trickle down” wealth is long discredited bullshit. If we want to help lift people out of poverty, if we want a more egalitarian society, it will require political will and political mechanisms to achieve it. 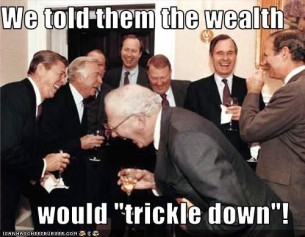