Power poverty on the up

Stuff has published a couple of very useful, but depressing, articles based on data extracted from the 2013 census.  The grimmest information is that fuel/energy poverty is increasing, with a higher proportion of households unable to afford any heating. 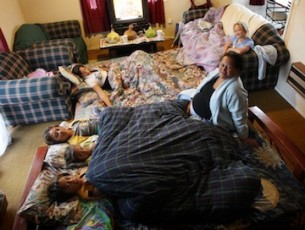 Auckland has the highest proportion of households in the country that never use heating.  Related to this, Auckland housing crisis continues to increase, with population growth being higher than the growth in building of new residences.  It is not surprising then, that a high proportion of Aucklanders homes, especially Pacific Island households, that are overcrowded.

Such living conditions will result in an increase in health problems, with an impact on things such as education and work outcomes.

Northland was next with 5.3 per cent and nationally it was 3 per cent.

Although Auckland homes don’t need to be heated as much as southern parts of New Zealand, there are some times when it is required, especially in uninsulated households.  These are the ones more likely to be inhabited by people on low incomes.

Fuel poverty in Auckland was also on the rise. Last year’s figures were nearly 40 per cent higher than the 18,513 dwellings noted in 2006’s census.  It was a national trend, with the number of unheated houses across the country rising to 44,832, up 35 per cent.

In Auckland unheated private dwellings are most common in Waitemata and south Auckland.

Nearly 16 per cent of houses in Waitemata went without heating, 12.3 per cent in Mangere-Otahuhu and 10 per cent of Otara-Papatoetoe homes.

These are low socio-economic areas.  The report also shows that a higher proportion of people across the country are living in rental accommodation.  Auckland has a big increase in renting.  Since 2006 there has been a n 18% increase in renters in Auckland, making the 2013 proportion being 35.4% of households being rented.

* The increase in renters was lower in Wellington (up 12 per cent) and Canterbury (up 11.7 per cent).

* But several other regions had even bigger increases in the renting population than Auckland, including Southland (up 27.2 per cent), Northland (20 per cent), and Bay of Plenty (19 per cent).

In yesterday’s article by Catherine Harris, the Auckland housing situation was highlighted.

Since the last census in 2006, Auckland’s population had risen 8.5 per cent, which had outpaced the 7.6 per cent increase in dwellings.

Home ownership rates in Auckland were 43 per cent compared to almost 53 per cent in the rest of the country, and this did not only affect the young, said Goodyear.

“There have been substantial drops in home ownership for Aucklanders aged in their 30s, 40s, and 50s since 2001.”

The process of supplying more houses for Auckland’s growing population was also slower than other centres.

There were 358 building consents issued in Auckland per 100,000 people last year, compared with 423 per 100,000 for New Zealand overall, although that was changing.

And inside the houses, Auckland’s share of the country’s overcrowded households had risen from about a third  in 1991, to almost half 12 years later.

The average Auckland household housed 3 people last year, up for 2.9 in 2006, while the rest of the country ranged from 2.3 to 2.7 people and households were either stable or falling. 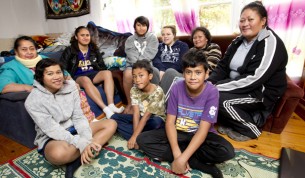 Not only has the government ailed to do anything to improve the living situations of a high proportion of Kiwis, but things have got worse under their watch.

As Anthony Robins showed yesterday, the National government’s “rock star” economy was more spin and fantasy of what might happen in the future, rather than being based in reality.  Furthermore, the government’s handling of the economy, with it’s unhelpful tax cut bribes, has resulted in a recovery being delayed.

56 comments on “Power poverty on the up ”